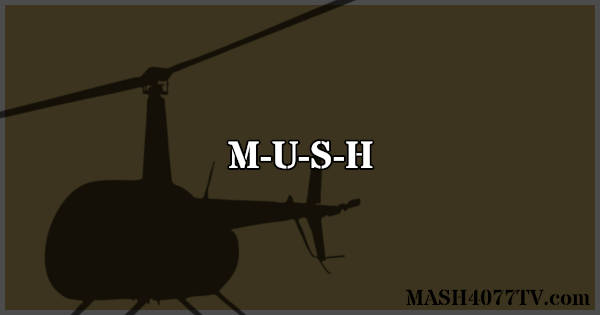 M-U-S-H is easily the strangest “spin-off” of M*A*S*H, although technically it was a parody rather than a true spin-off. Rather than a full-fledged television show, M-U-S-H was a series of cartoon shorts broadcast as part of a live-action, Saturday-morning children’s show called Uncle Croc’s Block, which was a satire of traditional children’s television programming.

Each episode included a “Star Time” segment, when a guest would stop by. These guests were parodies of famous characters, primarily from television. Some of these guests were Junie the Genie (I Dream of Jeannie), Steve Exhaustion, The $6.95 Man (The Six Million Dollar Man, Captain Klangaroo and Mr. Mean Jeans (Captain Kangaroo), Shylock Domes (Sherlock Holmes) and Old Fogey Bear (Yogi Bear).

In many respects, the live action portions of Uncle Croc’s Block served solely as wraparounds for the cartoons, which were introduced by Uncle Croc. There were three of them: Fraidy Cat, about a cat who has used up eight of his nine lives; Wacky and Packy, about a caveman and his pet woolly mammoth who somehow climb through a manhole and find themselves in the present day; and M-U-S-H. (There may have also been a fourth cartoon called “Super Fiends” featuring songs performed by ghosts, although this sounds very much like The Groovie Goolies, an unrelated Filmation cartoon.)

M-U-S-H, as the title made clear, was quite obviously a spoof of M*A*S*H. It stood for Mangy Unwanted Shabby Heroes and was about a group of dogs stationed at M-U-S-H in the frozen wastelands of Upper Sibonia. Most of the characters were based on characters from M*A*S*H: Bullseye, Trooper Yoe, Cold Lips, Major Hank Sideburns, Colonel Flake and Sonar.

There were no characters based on Klinger or Father Mulcahy. General Upheavel was Colonel Flake’s immediate superior and there was also one entirely new character, a nurse with a thick accent named Hilda. It was never made clear exactly what the dogs were doing in Upper Sibonia; although rifles were shown occasionally, the dogs were never seen fighting. Nor was M-U-S-H a hospital. Aside from Hilda, none of the dogs were doctors or nurses. In the opening credits, the dogs were referred to as peace officers.

None of the characters strongly resembled their M*A*S*H counterparts. Bullseye bore some resemblance to Hawkeye in that he was constantly cracking jokes. Both he and Trooper Yoe, whose voice was more than likely based on John Wayne, were laid back, indifferent to the chain of command, and more interested in parties than doing any real work.

Sonar, who at least once was shown holding a teddy bear, always wore a set of earphones with antennae on them. His eyes would flash momentarily and he would make a little noise before running through a wall or a door and making an announcement. Colonel Flake enjoyed the occasional game of golf, Major Sideburns was by-the-books and always wore his uniform and along with Cold-Lips was constantly scheming to get Bullseye and Trooper Yoe transferred to an even colder posting.

M-U-S-H shorts were each six minutes long. The plots of the shorts were simple, often reactions to something General Upheavel set in motion. For example, in one short he sent Captain Puddy Tat to M-U-S-H to investigate the shenanigans he has been hearing about. Bullseye and Trooper Yoe, with the help of Sonar, plot to disrupt his spying. 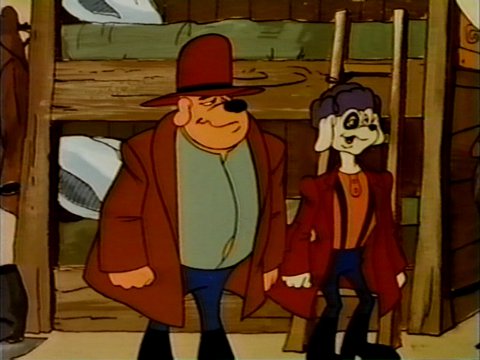 In another short, General Upheavel has the Congressional Budget Committee investigate overspending at M-U-S-H. Bullseye and Trooper Yoe decide to trick the committee into thinking M-U-S-H is broke, by wearing barrels as uniforms, serving beans and asking how many the committee members want, conducting target practice without any bullets (and having Sonar fire the one and only bullet), and faking Colonel Flake’s death due to starvation. The result? More money for M-U-S-H.

In one short very familiar to M*A*S*H fans, Major Sideburns is left in charge when Colonel Flake is ordered to a staff conference by General Upheavel, throwing plans for a big party into disarray. Major Sideburns singles out Bullseye and Trooper Yoe for punishment, giving them all sorts of absurd duties. Ultimately, he arrests the two but Colonel Flake returns to save the day and the tables are turned on Major Sideburns.

Another short involved the USO, led by Bob Dope, setting up for a show at M-U-S-H. Model Darlena Metric is there to raise morale and both Bullseye and Trooper Yoe chase after her. 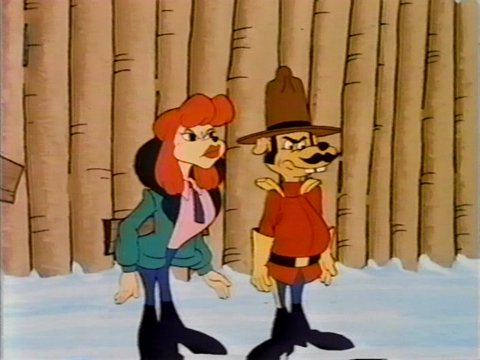 Other plots: General Upheavel insists that M-U-S-H send one dog to the Snowlympics Bullseye so Major Sideburns compete for the dubious honor; Major Mynah, General Upheavel’s pet bird, is dropped off at M-U-S-H to be looked after by Bullseye and Trooper Yoe; a hurt moose becomes an unwanted guest; the dogs of M-U-S-H are ordered to lose weight.

Uncle Croc’s Block was given the 10:30-11:30AM timeslot on ABC’s Saturday morning line-up. Squire Rushnell, ABC’s vice president for children’s programming, explained that Uncle Croc’s Block was “aimed at slightly older kid’s because it’s the first children’s satire series since Bullwinkle and George of the Jungle. And these were probably over the heads of kids — they had big audiences even among the college students. By contrast, Uncle Croc’s Block will be satirizing people like Evel Knievel, Sonny and Cher and The Six Million Dollar Man [1].

Uncle Croc’s Block premiered on Saturday, September 6th, 1975. In October, the series was cut back to half an hour and moved to the 12-1:30PM time slot before being pulled after the February 4th, 1976 episode. There is some confusion about whether the M-U-S-H cartoons continued to be seen after the show was shortened. According to Hal Erickson’s Television Cartoon Shows: An Illustrated Encyclopedia, 1949-2003, M-U-S-H was the only cartoon kept [2]. On the other hand, the recollection of at least one Uncle Croc’s Block viewer is that Wacky and Packy continued while M-U-S-H and Fraidy Cat were pulled [3]. Either way, Uncle Croc’s Block didn’t last long as a half-hour show. It was pulled off the air for good following the February 14th, 1976 episode.

Exactly how many episodes of Uncle Croc’s Bloc were produced is unknown. If it aired every week from September 6th, 1975 through February 14th, 1976 there would have been 24 episodes. And if M-U-S-H was indeed shown during every one of those episodes, there could be 24 cartoons.

In 1978, M-U-S-H was included in a Filmation syndication package called The Groovie Goolies and Friends, along with the Fraidy Cat and Wacky and Packy cartoons from Uncle Croc’s Bloc.