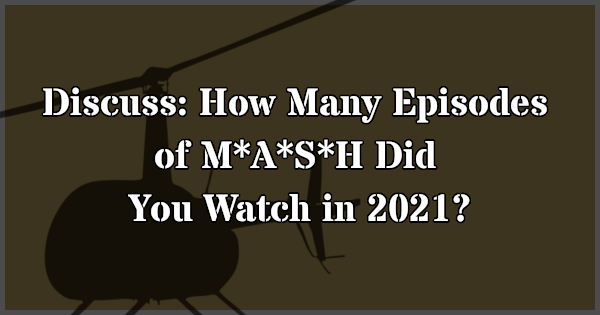 No, I’m not bringing back Monday M*A*S*H Discussions, which ran weekly from November 2017 to September 2018 and again from May 2019 to November 2019. However, I may occasionally post discussion topics if I think of a particularly good one and I will probably post them on Mondays.

That’s right, I didn’t watch a single episode of M*A*S*H in 2021. I can try to blame the DVD drive on my computer, which doesn’t always work, or the fact that Hulu streams M*A*S*H in widescreen, which I don’t like. But the truth is I have very little free time to watch television these days and way too many TV shows I want to watch. I’ve seen every episode of M*A*S*H at least five or six times, so the show isn’t anywhere near the top of my watch list at the moment.

How many episodes of M*A*S*H did you watch last year?