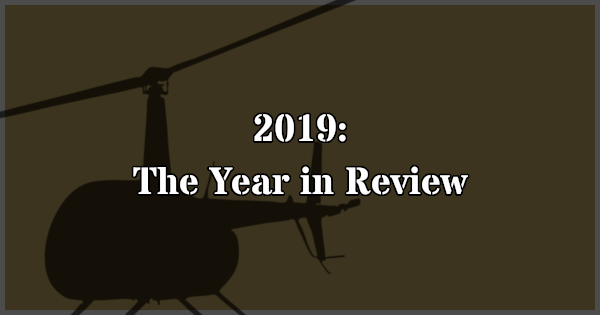 I’m a little late with my 17th annual Year in Review post, which looks back at all the anniversaries and M*A*S*H news from 2019.

On February 5th, the five surviving members of the M*A*S*H cast reunited for an episode of Alan Alda’s “Clear+Vivid with Alan Alda” podcast. Loretta Swit, Gary Burghoff, Jamie Farr, and Mike Farrell joined Alda to reminisce about their time on M*A*S*H and how communication helped them on screen and off.

MASH4077TV.com turned 20 in 2019. I celebrated the milestone with a newly redesigned website. Also: I finished reviewing every episode of AfterMASH, launched the fifth round of the Name That Episode game, and added a page about classical music to the Music of M*A*S*H section.

I also wrap up my Year In Review posts with the following quote from Season 9’s “A War For All Seasons” for years:

Why? Because there aren’t very many references to New Year’s Eve or New Year’s Day on M*A*S*H. There was this exchange from “Hot Lips and Empty Arms” during Season 2:

Happy New Year, everyone. I hope to continue exploring M*A*S*H memorabilia in the coming months. If possible, I also want to update and expand the Nurse of the 4077th section of the website at some point in 2020.