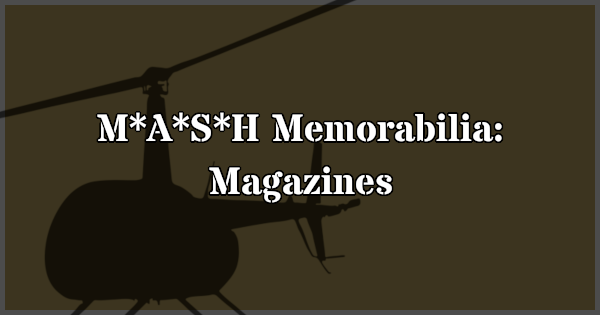 I’m continuing my look at M*A*S*H memorabilia, this time focusing on magazines. The following list includes more than 40 issues of a seven different magazines ranging from Cracked to TV Guide. This is not a complete list of every magazine with an article about M*A*S*H. I decided not to include local TV newspaper inserts/magazines or foreign magazines. I’ve also tried to only mention magazine issues published while M*A*S*H (and AfterMASH) were on the air. Also, I’ve noted which issues feature M*A*S*H covers.

Aside from one or two issues of TV Guide, I don’t own any of these issues. I’ve gathered the most accurate information I can from listings on eBay and other online sources. I apologize in advance for any mistakes or omissions.

When possible, I’ve provided links to articles that are available online.

Do you own any of these magazines? Be sure to let me know about other magazines that include noteworthy M*A*S*H articles.