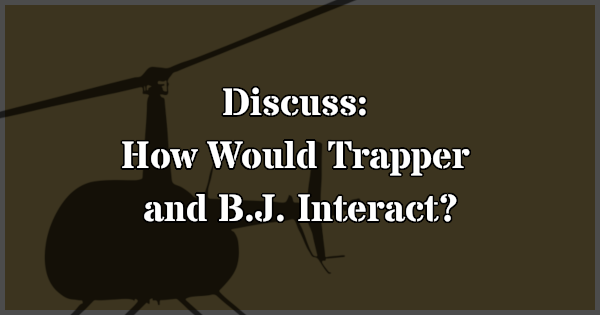 Two Men with Families, But Only One Family Man

Today we’re discussing Trapper and B.J. They’re both skilled surgeons with families who enjoy the occasional practical joke and hate military bureaucracy. The one big difference between the two men? B.J. is devoted to his wife while Trapper is unfaithful to his.

I think the two men would be friends if they served together at the 4077th. B.J. wouldn’t approve of Trapper cheating on his wife, of course, and Trapper might find it hard to listen to B.J. talk about his family all the time. The two would bond over their many similarities while also teaming up against Frank and Charles.

Assuming both Trapper and B.J. were assigned to the 4077th at the same time as Hawkeye, it would be very interesting to see how an episode like “White Gold” or “Preventative Medicine” played out with three opinions in the mix.

6 Replies to “Discuss: How Would Trapper and B.J. Interact?”