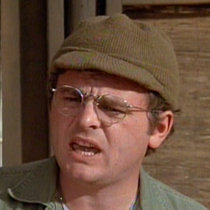 Capsule Summary: When Sophie gets sick while Colonel Potter is away, Radar turns to Hawkeye and B.J. for help. Meanwhile, Margaret worries about her appendix.

Although it may not seem like it, there’s an awful lot going on in this episode. There’s the A story involving Sophie being sick, the B story involving Margaret’s appendix, and the minor C story involving Klinger’s depression. Depending on whether or not you want to include Colonel Potter’s trip to Tokyo in the A story or not, there may also be a D story.

Both the A and B stories include multiple story strands. For example, the A story has Radar being worried, Hawkeye not feeling qualified to care for a horse, and B.J. reaching out to his father-in-law. The B story, on the other hand, has Margaret not wanting Frank to operate on her, Hawkeye making a lot of jokes at Margaret’s expense, and Frank reacting badly to Margaret wanting him far away from her.

As you can see, it’s a pretty busy episode and unfortunately that doesn’t leave a lot of time to develop either the B or C stories. I think the A story works pretty well. Margaret’s appendix may have done better as an A story in another episode. Or it may not have been strong enough to anchor an episode. It’s hard to say.

It’s odd that so much time is spent on how upset Hawkeye and B.J. are at the prospect of Frank being left in charge without any payoff. Frank tells Colonel Potter about Hawkeye making a face at him in the Mess Tent but that’s about it. Why so much build up? That time could have been better spent expanding Margaret’s appendix story.

Father Mulcahy’s scenes all feel pretty forced, particularly his involvement in the bucket brigade. It’s an amusing scene, even if it does almost last too long, but maybe Father Mulcahy should have been the one handing B.J. the buckets rather than standing awkwardly next to Sophie’s stall.

Frank is at his snotty best when he bursts into the O.R. and refuses to leave until Margaret tells him to. Even then, Colonel Potter has to physically push him out of the room. Frank screaming “I hope you have a big scar!” is petty and childish and perfectly in character.

Also perfectly in character is Hawkeye when he spends so much time joking around about Margaret’s appendix in her tent.

I wonder if there was more to Klinger’s depression story line that ended up cut for time. It feels like it starts abruptly. One minute he’s asking Colonel Potter for fabric, the next he’s suddenly depressed. He almost gets his discharge but ruins his chances by celebrating too early. 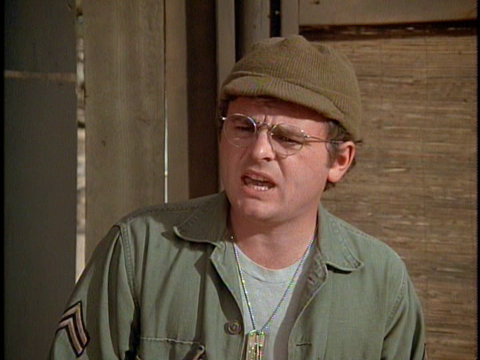 When Radar finds Sophie on her side in the hay, it sort of looks like a donkey on its side rather than a horse. I really don’t think it’s the same animal.

How dangerous is Hawkeye and B.J.’s dart game using needles?

Despite having several lines during the bucket brigade scene, Kellye Nakahara isn’t credited for her work in this episode. She’s also has one line in Margaret’s surgery scene.

I find it very hard to believe that the military would be shipping a print of Hedy Lamarr’s 1933 Ecstasy around Korea. It wasn’t reportedly banned in the United States at one point and wasn’t released until 1940. Even then, it was never widely seen in theaters. It’s only slightly more believable that someone was able to get their hands on a print and slip it into circulation in Korea.