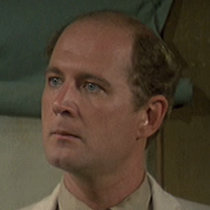 Capsule Summary: The 4077th needs a temporary replacement surgeon when Frank Burns goes AWOL so the stuffy Charles Emerson Winchester III is sent to help out. When Frank gets a transfer and a promotion, Charles is assigned to the 4077th permanently, much to his horror.

As I mentioned in my review of “Margaret’s Marriage” earlier this year, the writers wanted to bring Larry Linville back for a farewell episode at the start of Season 6 but he declined to return. According to Ken Levine, no script was ever written but a story was planned out to give Frank a proper farewell. That’s basically what happened when Gary Burghoff left M*A*S*H.

Because Linville didn’t want to come back, the writers had to craft an episode that wrote Frank out of the series without actually featuring Frank. That’s more or less what happened to Trapper when Wayne Rogers left M*A*S*H after Season 3. However, Frank plays a much larger role in “Fade Out, Fade In” than Trapper did in “Welcome to Korea.” Trapper went home to his family and Hawkeye never got to say goodbye. That was the end of it.

That could have happened to Frank, too, but it would have been repetitive. Instead, the writers decided to have Frank suffer a breakdown following Margaret’s marriage to Donald Penobscott and use that to explain his departure from the 4077th. Rather than simply have him sent home on a medical discharge, Frank was given both a promotion and a transfer stateside. It may have upset viewers as well. Allowing Frank–the “villain” on M*A*S*H–to go home while everyone else remained in Korea might appear cruel. Or is it a perfectly reasonable thing for illogical, irrational, and irrefutably absurd military to do?

The reaction to Frank’s transfer back to the United States is hilarious. I wonder who came up with having everyone throw papers in the air after the toast in Colonel Potter’s office. Of course, their jocularity turned to disgust when Frank called and told them about his promotion and transfer.

It’s strange but even though I’ve a lot to say about Frank (“Fade Out”) I don’t really feel like there’s much to say about Charles (“Fade In”). I’ve mentioned numerous times how much I’ve grown to appreciate the character of Charles and, more importantly, how superbly David Ogden Stiers portrayed the character. The seeds of Charles Emerson Winchester, III are planted here in his first appearance. He’s a little stiff, quite a bit obnoxious, and a very talented surgeon. He ruffles feathers the second he arrives at the 4077th and makes it clear he considers himself better than the other surgeons. And he gives this little speech:

“But know this. You can cut me off from the civilized world. You can incarcerate me with two moronic cellmates. You can torture me with your thrice daily swill, but you cannot break the spirit of a Winchester. My voice shall be heard from this wilderness and I shall be delivered from this fetid and festering sewer.”

I love it. There’s a bit of humanity in Charles, however. After B.J. has to take over for him in the O.R., Charles opens up about his concern that he can’t adjust to meatball surgery. Of course, he then proceeds to insult them all.

Ken Levine had this to say about Charles a few years ago at his blog:

I was there for the creation of Charles Emerson Winchester. The idea was to replace Frank Burns with a character that was very much his opposite. We all wanted Charles to be smarter and more gifted as a surgeon than Hawkeye or B.J. and, as opposed to Frank, a worthy adversary.

There were no auditions for the part. Producer Burt Metcalfe had seen David Ogden Stiers guesting on an episode of the MARY TYLER MOORE SHOW and thought he’d be perfect. It was only after David was hired that we learned he could do that slight Boston accent.

Charles is no Frank. He’s a gifted surgeon and knows his way around a prank. I wonder what fans of M*A*S*H thought of Charles while watching this episode when it first aired.

There are other minor storylines in this episode. One of them, the wounded battalion aid surgeon Captain Berman, ties into the Charles storyline. The others are unrelated: Klinger and his “lawyer,” Margaret and her worries about Donald becoming distant, the soldier who doesn’t want to return to the front because he doesn’t want to kill anyone else. They help flesh out the episode but don’t add much substance. Margaret’s problem with Donald lay the groundwork for her eventual divorce. 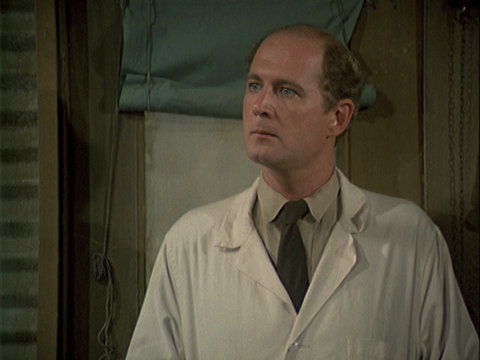 “I shall be delivered from this fetid and festering sewer.”

CBS repeated this episode in two parts on March 6th and March 13th, 1978. It was later syndicated as two half-hour episodes.

Radar supposedly smokes his first cigar in this episode even though he was seen smoking a cigar in several early episodes (including “Requiem for a Lightweight” and “Chief Surgeon Who?”).

I honestly didn’t notice while rewatching the episode for this review but during the scene in the Officers Club when Charles is talking to Igor, it’s not Jeff Maxwell’s voice we’re hearing. It’s a mystery why another voice was inserted in post-production. Several sources online state it is Johnny Haymer’s voice. Haymer played Sgt. Zale.

19 Replies to “Episode Spotlight: Fade Out, Fade In”