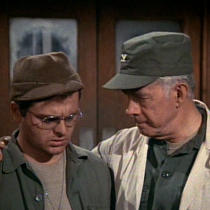 Capsule Summary: Radar tries to convince Frank to requisition tomato juice for Colonel Potter, but Frank refuses to help unless he gets something he wants, and things quickly start to spiral out of control.

“The Price of Tomato Juice” reminds me of an earlier episodes: “For Want of a Boot” from Season 2. Both feature a character wheeling and dealing in an attempt to get something. Radar wants tomato juice in this episode; Hawkeye wants a new pair of boots in “For Want of a Boot.” The humor in these episodes comes from the convoluted maze of favors and requests involved. Personally, I think the concept works much better in “For Want of a Boot.” That’s partly because Hawkeye going to great lengths trying to get a pair of boots is simply more amusing than Radar trying to do something nice for Colonel Potter.

The two episodes have very different endings. Radar is ultimately successful in acquiring tomato juice while Hawkeye fails to procure a new pair of boots. But there’s a twist ending to “The Price of Tomato Juice.” Poor Radar. All his hard work for nothing.

(Then there’s “The Longjohn Flap” from Season 1. Rather than want something, Hawkeye has something that others want: his longjohns. They change hands time and again before making their way back to their rightful owner.)

Sometimes, it seems like Radar can do anything as company clerk. Then there are episodes like “The Price of Tomato Juice” in which he can’t get his hands on tomato juice without a signed requisition form. We don’t even see Radar trying to trade for tomato juice with other outfits.We do see him try to slip a two day pass for Klinger past Colonel Potter. That sort of thing often worked with Colonel Blake but not Potter. He pays closer attention to what he’s asked to sign.

Contrast Margaret’s excitement about General Barker’s soiree with Colonel Potter’s disgust at being asked to arrange for one of his nurse’s to spend a weekend with a general in Seoul. Then wonder exactly what kind of wacky shenanigans Klinger got up to when he went to Seoul instead of Margaret. Klinger tells Potter and Radar he had “a million laughs” with General Barker.

Finally, what’s with the recurring gag about flies in camp? We’re told B.J. is insect officer but he never does anything about the infestation of larvae. 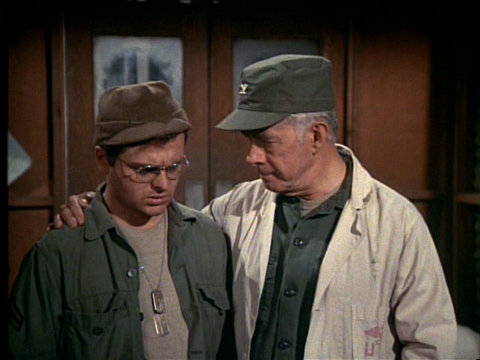 “Kindness is never for nothing, son.”

General Bradley Barker is referred to but not seen in this episode. This isn’t same General Barker who appeared in “Requiem for a Lightweight” and “Chief Surgeon Who?” back in Season 1. Margaret tells Frank she knows two General Barkers.

There are some fans who believe this episode includes a blooper when Igor tells Frank his name is Maxwell (the last name of the actor who plays Igor, Jeff Maxwell). In a December 2002 post to the alt.tv.mash Usenet group, Jeff Maxwell offered the following explanation:

It was not a “slip up,” I spoke the words exactly as written in the script. If anybody made a mistake, it was a writer.

Likewise, when asked in December 2000 if Radar’s “What the hell is that?” line upon seeing Hawkeye swat a fly with the handle of his atomizer handle was ad libbed, Larry Gelbart had this to say:

Radar refers to a younger brother who died, the second and last time he mentions having a brother on M*A*S*H. He also spoke about a brother in “Officer of the Day” during Season 3. In at least two other episodes, Radar mentions having a sister as well. Otherwise, Radar is an only child.

Hawkeye reads out a headline about the Empire State Building selling for $20 million dollars. The iconic New York City skyscraper actually sold for $34 million in May 1951.

8 Replies to “Episode Spotlight: The Price of Tomato Juice”