Capsule Summary: An entire episode shown from the point of view of a soldier rushed to the 4077th for surgery after being wounded while on patrol.

It’s hard to discuss this episode without talking about what an exceptional half-hour of television it is and how ambitious the cast and crew were to attempt it. “Point of View” wasn’t the first time M*A*S*H pushed the boundaries of the traditional sitcom format. Earlier examples include “Hawkeye” and “The Interview” during Season 4.

Likewise, “Point of View” wasn’t the last “high concept” episode. “Dreams” followed in Season 8, then “Life Time” and to a lesser degree “A War for All Seasons” in Season 9, plus “Follies of the Living–Concerns of the Dead” in Season 10. Out of all 251 episodes, I think it’s safe to say “Point of View” was the most challenging for the cast and crew.

The story takes a backseat to the visuals but it’s simple and solid. Private Billy Rich is wounded while on patrol and, after being treated by a medic, is sent via chopper to the 4077th for surgery. He has shrapnel in his neck and requires a tracheostomy to insert a tube to help him breath.

The surgery initially appears to have been a complete success but later Hawkeye and Charles are forced to perform a second, very tricky, surgery. Rich pulls through and is able to thank Hawkeye before leaving for Seoul and, eventually, a trip back home to Texas.

There’s a minor B story involving Colonel Potter, who is acting angry and moody because he forgot to call Mildred on their anniversary. Rich is able to help by letting Hawkeye know why Potter is upset. Radar calls Mildred on Potter’s behalf and everything works out.

The point of the episode is to allow the viewer to experience the 4077th through the eyes of a wounded soldier. The camera stands in for Private Rich, seeing everything he sees: the explosion that wounds him, the chopper ride to the 4077th, traveling via jeep from the chopper pad to pre-op, getting x-rayed, preparing for surgery, waking up in post-op, enjoying a sponge bath, visiting the Mess Tent, choking in post-op, going back in for surgery, waking up for a second time in post-op, and finally being loaded onto a bus.

I love the scene in post-op between Charles and the wounded soldier in the bed next to Private Rich. Charles jokingly insults the soldier for pretending to be in a lot of pain:

Charles: “By the way, that was the worst performance I’ve ever seen in here. It lacked sincerity, depth. You’re lucky I stayed through the whole show.”

He then laughs and walks away. It’s a nice, human moment for Charles. 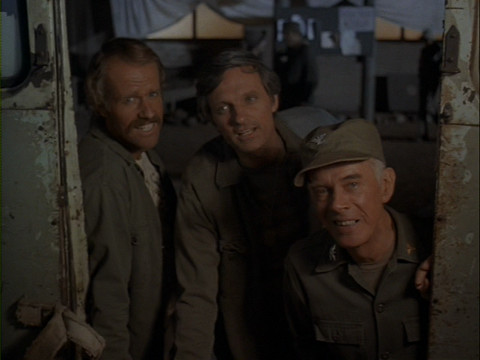 Ken Levine has written about “Point of View” several times at his blog. He considers it his favorite episode out of the 19 he co-wrote with writing partner David Isaacs. In a June 2006 post, Levine recalls how the two realized the concept only worked if their wounded soldier couldn’t speak:

It seemed to us the key to making this device work was not having the soldier talk. And that sparked our story. What if the patient is hit in the throat? He can’t speak. He must undergo a series of tricky operations (the suspense) until finally he is able to utter only two words –

He praises director Charles Dubin and the cast for pulling off the unusual script:

So much credit for the success of the episode goes to director, Charles Dubin. And remember, he had only three days to film this, not three weeks…or months. And this was 1978, before steady cams. I think D. W. Griffith used this camera to shoot BIRTH OF A NATION. It couldn’t have been heavier or more unwieldy.

The cast was marvelous, really rising to the occasion. It’s hard enough to relate to fellow actors, but to play highly emotional scenes looking directly into a camera has to be nearly impossible. Additionally, scenes all had to play out in one take. We couldn’t cut back and forth between characters and angles and takes. To this day I marvel at their skill.

Levine recalls how horrified he was when he first watched the episode in a screening room. Radar’s head filled the screen. It was gigantic. Later, when the episode aired on CBS, he decided Radar’s head didn’t look quite as humongous on a small TV set.

In a December 2007 post, Levine shared a portion of the script. In an April 2009 post, he answered two questions about the episode, revealing how ceilings had to be built on several sets and a special camera mount devised. He also mentions spending two seasons lobbying before Burt Metcalfe agreed to let them write the episode. Finally, in a December 2011 post following the death of Charles Dubin, Levine recalls how Dubin “coaxed wonderfully subtle performances from every member of the cast” while filming “Point of View.”

Jamie Farr picked “Point of View” as one of his favorite episodes during MeTV’s 2016 “The Best By Farr” marathon and remembered how difficul it was filming every scene in one take:

“Point of View” earned a slew of writing and directing nominations:

It won none of them.

According to the letter Private Rich is writing in post-op, most of this episode takes place on September 12th, 1951.

The chopper ride provides a wonderful look at the 4077th.