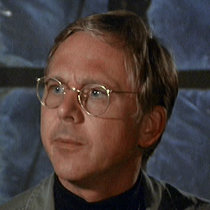 [NOTE: I wrote a very brief placeholder early this morning (at 12:16AM ET) before I had a chance to put together the following tribute to William Christopher.]

William Christopher, who played the kind but occasionally feisty Father Mulcahy, passed away early yesterday morning (December 31st, 2016) at the age of 84. According to news reports, he died of cancer, which he’d been battling for 18 months. He’s survived by his wife of almost 60 years, Barbara, and two sons. Obituaries can be found at Variety, NBC News, and CNN.

Christopher died exactly a year after the death of fellow M*A*S*H cast member Wayne Rogers on December 31st, 2016. I’m sure the entire M*A*S*H fan community joins me in extending condolences to the family and friends of William Christopher for their loss.

In the pilot episode of M*A*S*H, Father Mulcahy was played by actor George Morgan. According to Larry Gelbart, the producers decided to replace Morgan, wanting someone with “a quirkier personality” to portray the 4077th’s priest. William Christopher got the job and made his first appearance as Father Mulcahy in “Requiem for a Lightweight” in which he refereed Trapper’s boxing match. As the series progressed, boxing became a large part of the character.

For the first four seasons, Christopher received billing in the closing credits. It wasn’t until Season 5 that he was promoted to a full member of the cast. That same year, he missed several episodes while he was out sick with hepatitis.

An early indication of William Christopher’s talent came in “Dear Dad” (Season 1) when Father Mulcahy talked Klinger into giving up a hand grenade. Many fans consider Father Mulcahy’s finest moment to be the following scene from “The Interview” (Season 4):

When the doctors cut into a patient and it’s cold, you know, the way it is now, today steam rises from the body and the doctor will will warm himself over the open wound. Could anyone look on that and not feel changed?

Who can forget the Father Mulcahy soundalike contest in “Movie Tonight” (Season 5)? Then there was the time he punched a soldier in “Dear Sis” (Season 7). And of course this memorable quote from “Life Time” (Season 8):

Following the end of M*A*S*H, Christopher joined Harry Morgan and Jamie Farr on AfterMASH, which aired on CBS from 1983 to 1984 (with one last episode airing in 1985). He made a handful of TV guest appearances in the 1980s and 1990s, including Murder, She Wrote (1985), CBS Summer Playhouse (1987), Lois & Clark: The New Adventures of Superman (1997), Mad About You (1998). In 1997, Christopher co-starred with Jamie Farr in a touring production of The Odd Couple. He came out of retirement in 2012 to play Father Tobias on the NBC soap opera Days of Our Lives, appearing in more than 10 episodes.

Along with his wife, Christopher wrote Mixed Blessings, a non-fiction book about raising a son with autism. It was published in 1989.

Scriptwriter Ken Levine has penned a brief tribute to William Christopher at his blog. “A sweeter, nicer, more gentle man you’d never find,” Levine wrote. “He was an absolute pleasure to work with. And he took a thankless role and turned it into a vibrant character.”

“Our dear Bill and his goodness are a great argument for there being a heaven. I never heard him complain or lose his temper. Everyone adored him. A great sense of humor and a great humanitarian. He became TV’s quintessential padre as Father Mulcahy on ‘M*A*S*H.’ It was the most perfect casting ever known. He was probably responsible for more people coming back to the church. If God is nigh, then surely he or she will welcome Bill with open arms.”

His pals from #MASH miss Bill powerfully. His kind strength, his grace and gentle humor weren't acted. They were Bill. ❤️#WilliamChristopher

If the tweet doesn’t load properly, here’s what Alan Alda wrote: “His pals from #MASH miss Bill powerfully. His kind strength, his grace and gentle humor weren’t acted. They were Bill. ❤️#WilliamChristopher”.

I’m very sad at the loss of this nice nice man, the sweetest part of the MASH family. Bill and his wife, Barbara, shop at the same market I do in Pasadena. We’ve been running into each other at least twice a month for the last ten years, mostly in the produce section. One of the checkers loves MASH, and much to his delight at having two people from the show as regulars, beaming, he never misses a chance to tell me that I just missed Bill.

And I will, very much.

My heart goes out to Barbara and his sons. Navigating his illness and this loss during a holiday season must be excruciating.