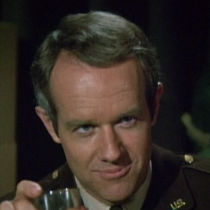 Capsule Summary: While trying to catch Trapper at the Kimpo Air Base, Hawkeye meets the 4077th’s new surgeon–B.J. Hunnicutt. Meanwhile, Frank is in command and loving every minute of it.

I honestly don’t have much to say about “Welcome to Korea,” at least not about the storylines and plot. The episode had one big goal, to introduce the character of B.J. Hunnicutt, and it did a decent job.

Watching the episode, it’s clear that B.J. won’t be a clone of Trapper. He’s a family man and seemingly a nice guy who clearly doesn’t know what to expect in Korea. His first few hours in country are a trial by fire: he watches locals risk their lives to clear a minefield, comes under fire from guerillas, gets shelled, and sadly sees death and destruction up close. As if that isn’t bad enough, he slips in the mud.

Poor Hawkeye. He’s shocked when he learns that Trapper has gone home gone. Even worse is his distress when he misses saying goodbye to his friend by ten lousy minutes. Frank finding Trapper’s robe and hat in the Swamp is a nice touch. So is the brief mention of Colonel Blake in the Kimpo Officers’ Club. “Henry was okay, from the navel out in every direction,” Hawkeye tells B.J. “He sure was,” Radar says.” Notice the look on Radar’s face. He’s still devastated.

Does anyone else feel even a little bit sorry for Frank, knowing his days in command are numbered? In earlier episodes, his brief stints as CO didn’t go well for the rest of the camp and judging from his actions in “Welcome to Korea,” he had no intention of easing up on rules and regulations. Margaret seemed to be doing more of the work than Frank.

-Hawkeye promoting Radar to the rank of Corporal-Captain is hilarious. So is the reaction of the unnamed colonel: “I don’t like it. I don’t like it at all.”

-Klinger flipping through one of Hawkeye’s nudist magazines (“I wonder what a naked girl sounds like on the phone.”) and then stuffing it under his shirt is amusing.

-Is it just me or does the blood on the wounded soldier Hawkeye and B.J. treats look incredibly bright and fake? 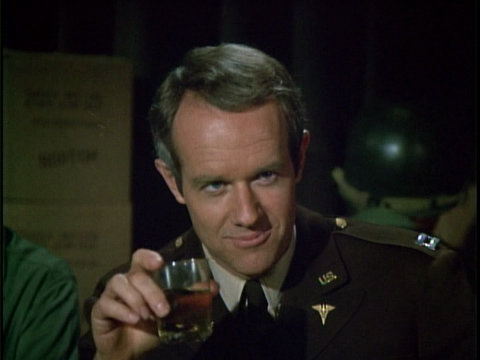 This was the first hour-long episode of M*A*S*H. It was produced as two half-hour episodes (with production numbers G504 and G506). CBS repeated the episode in its original hour-long form but when the series went into syndication, it was aired in two parts.

Larry Gelbart was asked quite a few questions about this episode over the years at the alt.tv.mash Usenet group. Fans were particularly interested in knowing details of how the departure of Wayne Rogers impacted Season 4 episodes. Gelbart offered the following explanation in May 2000:

With Stevenson definitely gone at the end of season 3, plotting began on what would have been the first episode of Season 4 – “Change of Command.” The work was done during the hiatus between (seasons) 3 and 4.

During that period, we sweated out the Rogers situation – would he leave the show, wouldn’t he, etc. When it became clear that he was leaving, we began casting for another actor and preparing the script for “Welcome to Korea,” without a whole lot of time to get it ready.

In other words, had Rogers not left the series, Season 4 would’ve opened with “Change of Command” and the arrival of Colonel Potter.

For many years, fans have wondered whether the PA announcement at Kimpo Air Base (“Sergeant Sterner, report to maintenance. Sergeant Sterner, on the double.”) was voiced by Wayne Rogers. When asked in March 2002, Larry Gelbart responded with the following:

No. Wayne was long gone when we recorded that PA announcement.

However, in January 2016 Ken Levine was asked the same question at his blog. According to him, Wayne Rogers did provide the voice, uncredited. I’m still not convinced. Rogers was in the middle of a contract dispute at the time. Why would he agree to record a PA announcement? Plus, Larry Gelbart said it wasn’t Rogers.

Other behind-the-scenes details from Larry Gelbart:

-When Hawkeye and Radar are driving to Kimpo, time compression was utilized. “It was the only way we could make it seem as though
our clunky old jeep could appear to be going swiftly,” Gelbart explained [July 1998].

-Pete Rugolo was brought in to compose most of the music for this episode, including the jazzy version of “Suicide is Painless” used during the “roll call” montage. The score was meant to reproduce the sound of the big bang era. “It was a giant effort and I feel he brought it off brilliantly,” said Gelbart [January 2000].

-The scene in which Hawkeye, B.J., and Radar steal the jeep and drive off at Kimpo was shot at the Fox Ranch. The same location was used in the movie MASH [December 2004].

A quick shot of B.J. running toward a helicopter is added to the opening credits in place of Trapper. The same shot is also used in several other episodes before being replaced by a close-up of B.J. Also, the final shot of the jeeps transporting wounded has been cropped to cut out Trapper in the top jeep.

Starting with Season 4, Jamie Farr’s name was added to the opening credits.

The “roll call” near the end of the episode prior to the brief scene with Colonel Potter was the fourth and last time that particular device was used on M*A*S*H. Similar roll calls were used in “M*A*S*H–The Pilot,” “Dear Dad,” (both Season 1), and “Divided We Stand” (Season 2).