Capsule Summary: While stricken with an ingrown toenail, B.J. combats Charles and his loud music. Meanwhile, Colonel Potter realizes he has to write a report criticizing an old friend.

This was the second episode to feature a storyline in which Colonel Potter must confront an old friend. The first was “Ping Pong” during Season 5–in that episode, Lt. Colonel Harold Becket was trying to get enough time on the front lines to allow him to retire as a full colonel. Potter was relatively quick to ship Becket back home, telling him “I don’t care if it costs me every friend I’ve got. If one kid gets hurt, the price is too high.”

Yet in “Friends and Enemies,” despite his experience with Harold, Potter reacts angrily when Hawkeye comes to talk to him and refuses to believe his old friend was at fault. Then he quickly changes his tune after talking to Sgt. Zurilli. Perhaps Potter was simply tired when Hawkeye came to talk to him. He does later suggest to Hawkeye he has a “blind spot” when it comes to friends that go back as far as Woody.

The scene in which Potter confronts Woody is very well done:

Woody: “You don’t understand, Sherman. With a report like that, there’s no chance I’ll ever get into action again.
Potter: “That’s exactly why I’ve got to do it.”
Woody: “When the chips are down who can you count on, Sherman, if you can’t count on your old friends?
Potter: “Woody, this has nothing to do with friendship.
Woody: “You bet it doesn’t. Not anymore.”
Potter: “Woody, don’t you think we’ve been through too much to let it end like this?
Woody: “I didn’t end it. You did!”

I wonder what they were drinking that made their voices so gravely.

The B.J./Charles/Margaret B story is just silly. Margaret is particularly shrill at times, first when she receives her record player and later when she accidentally runs into B.J.’s foot in Post Op. I don’t totally understand B.J.’s motivation for manipulating Charles and Margaret. If he truly wanted peace and quiet, why did he send Goldman to the Officers’ Club? Why was he willing to spend so much money to annoy Charles? I suppose he was bored. 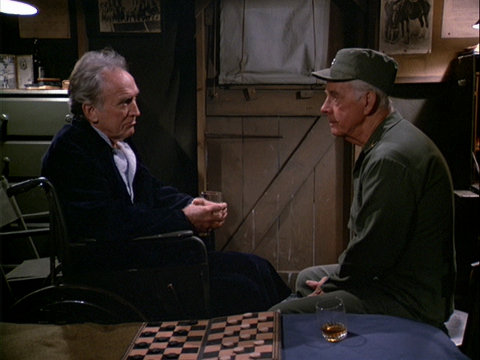 There’s an abrupt cut when Margaret and Charles are leaning toward B.J. in the Swamp. “So where did you go to high school?” Charles asks. It looks and sounds as if he’s about to say something else, perhaps use a corny nickname the way B.J. did earlier in the episode when he called Charles “Chuck.”

Roy Goldman has quite a few lines in this episode. Could it be his largest role in any episode?

Jack Yates is credited as “Large enlisted man” in the closing credits. That’s an unusual credit, right? I’m guessing he’s the soldier who smashes the jukebox in the Officers’ Club.