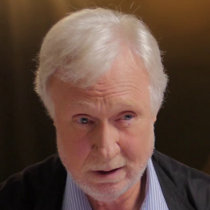 According to Mike Farrell, an executive at CBS insisted that M*A*S*H could not end with the war ending, claiming that the definitive ending to The Fugitive “killed the show in syndication.” Farrell looked at the executive and said, “It may surprise you to know that most of the people in the country understand that the Korean War came to an end.”

Scriptwriter Ken Levine considers M*A*S*H “the great existential comedy/paradox” because it was about men forced to save lives during a war when the “objective is to kill people.”

Finally, Dan Wilcox remembers how Burt Metcalfe would read a quote from a nurse at a actual MASH unit during the final 12 hours of the Korean War. When asked how she felt about peace, the nurse pointed at triage underway and said “Does this look like peace to you?” The writers gave that line to Margaret.