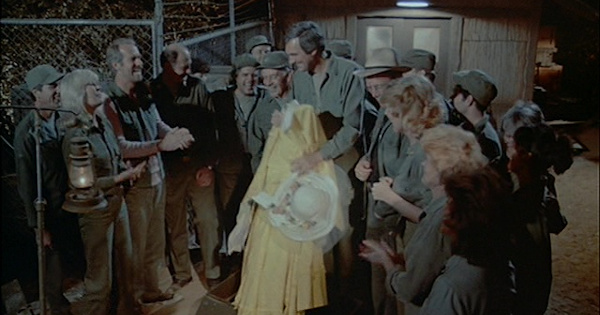 Capsule Summary: Margaret tries to put together a time capsule while Hawkeye.

The penultimate episode of M*A*S*H was a busy one, with several storylines and story strands. Margaret and her time capsule is clearly the A Story. Then there’s the Father Mulcahy/Klinger B Story about the refugees and Soon-Lee, the C Story involving Rizzo’s grenade, and the D Story about the missing chopper pilot.

It’s interesting that there’s no mention of the Korean War coming to a close. The refugees could be considered a vague reference, I suppose, and the introduction of Soon-Lee and her search for her parents does tie this episode directly to “Goodbye, Farewell and Amen.”

Although the scene near the end of the episode when the camp gathers to bury the time capsule is a great one, the rest of the A Story isn’t. Margaret is too shrill while Hawkeye is too immature.

Klinger serving as prison warden for Soon-Lee the suspected sniper is a little weak. Where were the MPs? Why did Klinger believe she was innocent just because her story happened to remind Father Mulcahy of some refugees he talked to? More importantly, why didn’t Colonel Flagg show up to interrogate the prisoner?

The dummy hand grenade C Story starts out okay. Igor wanting to turn it into a reading lamp is amusing as is Rizzo using it to scare B.J. in the showers. That should have been the end of the storyline. Rizzo trying to use it again to scare Charles is too much, as is B.J. scheming with Charles to get back at Rizzo. I can believe that B.J. told Charles about the incident in the shower, although it isn’t like the two were best friends who shared everything. B.J. hiding outside the Swamp is too much.

I really like the missing chopper D Story. It starts as a bit of a mystery, which is unusual for M*A*S*H. I wonder if Lt. Brannum saving Corporal Stoddard’s life by flying his chopper in 200-foot intervals was based on a true story. It’s an incredible story and is tied nicely into the time capsule storyline.

I’m probably not the only one who wishes the episode ended with the burying of the time capsule. The tag scene is unnecessary, although the mention of Frank Burns is nice, and Charles tossing the grenade in the air is a bit too silly.

“As Time Goes By” may have been the second-to-last episode aired but it was actually the last episode filmed. The scene in which the time capsule was filled was shot on Stage 9 on Friday, January 14th, 1983 with studio and network personnel watching plus dozens of reporters and cameramen. It was understandably very emotional for the cast and crew. In The Last Days of MASH, Alan Alda reveals how difficult it was to film the scene with so many people watching and how when it was all over, the “private moment we had been looking forward to was lost in a storm of flashing strobes, microphones and video lenses.”

Footage of this scene being rehearsed was included as a bonus feature in the Martini & Medicine Complete Series DVD set. I’ve posted some clips of contemporary news coverage of the last day of filming, which you can find here.

The cast buried a real time capsule filled with props from M*A*S*H. I believe in one of Alan Alda’s autobiographies he reveals that it was dug up shortly after they buried it during construction.

This episode was dedicated to the memory of Connie Izay, a registered nurse who served as technical advisor for the series from 1977 to 1982. She passed away from cancer in August 1982. Izay appeared in two episodes (“Guerilla My Dreams” and “Dreams”) and several sources indicate she also appeared uncredited in “Morale Victory.” Prior to M*A*S*H, Izay worked as a nurse at Universal Studios, where she started serving as an advisor for Marcus Welby, M.D.

16 Replies to “Episode Spotlight: As Time Goes By”