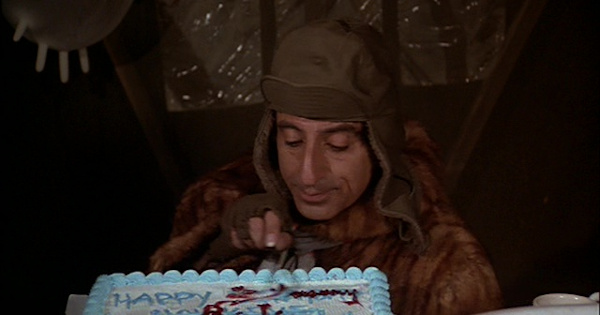 If ever there was an episode that didn’t need a B story, “Lend a Hand” was it. Yes, Borelli is an unlikable character. Yes, he brings out the worst in Hawkeye. Yes, Hawkeye and Dr. Borelli constantly bickering felt repetitive and forced. Still, there’s no denying the two have chemistry. Add in Corporal Jarvis, who managed not once but twice to temporarily shame the two surgeons into playing nice, and you have the makings of a decent episode.

Dr. Borelli is played, of course, by Alan Alda’s father Robert Alda. He made his first appearance in “The Consultant” during Season 3 (my review of that episode can be found here). “Lend a Hand” was a true Alda family reunion; it also featured Alan Alda’s younger half-brother Antony Alda as Corporal Jarvis.

I didn’t think much about this while rewatching the episode but once it was over I realized something: “Lend a Hand” would have worked perfectly had Hawkeye been the only main character to appear in the episode. That’s a bold statement, I admit, and not one most fans will agree with. But I honestly think the episode would have been so much better had it focused solely on Hawkeye, Dr. Borelli, and Corporal Jarvis.

The gap between “The Consultant” and “Lend a Hand” was five years. That’s a long time in TV Land and I wonder how many viewers in 1980 remembered Borelli from an episode aired in 1975. If they did, they’d probably remember that Borelli in “The Consultant” wasn’t an annoying know-it-all. He was an alcoholic, though, something that was never mentioned in “Lend a Hand.”

Borelli’s reintroduction in “Lend a Hand” was thus likely unnecessary. To new viewers, he was a new character while to old viewers he was probably just as new.

In my mind, the episode should have started with Hawkeye and Borelli already on their way to the aid station. They could be arguing about a wide variety of things, including cheese, on their way. Once there, many of the scenes could unfold as they did in the episode. Jarvis being upset with the two surgeons for caring more about their arguing than the man on the operating table was perhaps the best part of the episode.

During surgery, Hawkeye’s approach fails and Borelli smugly takes over. Then his approach fails and the two have to start working together. Then the bombs and shells hit and the two are injured. Now they really have to find a way to work together to save a man’s life. They’re successful and the tag scene sees them driving back to the 4077th with a better understanding of one another. They’re still not friends but there’s respect.

More importantly, it’s completely unbelievable that nobody else at the 4077th would know when Hawkeye’s actual birthday was or, once the plan changed, when B.J.’s wedding anniversary was.

I will admit that Klinger having to constantly alter the icing on the cake was a tiny bit amusing.