Capsule Summary: A general wants Hawkeye to serve as his personal physician. Meanwhile, Radar cares for a South Korean woman and her baby.

I really like the A story in this episode, even if Hawkeye is a little too sanctimonious at times. The A story has as much to do with Colonel Potter as it does Hawkeye. Potter keeps his cool when Colonel Bidwell comes sniffing around looking to poach his best doctor. He tells Bidwell the truth and lets him experience firsthand Hawkeye’s attitude as well as his skill. He must have been annoyed when General Korshack showed up after assuming he had taken care of things with Bidwell.

It’s hard to say whether Hawkeye played up his joking, insolent manner in front of General Korshak. It was nice to see a general who wasn’t depicted as cruel or incompetent, just a little selfish. Korshak could have (and if this was real life probably would have) simply had Hawkeye transferred to Tokyo without worrying about his feelings on the matter.

Instead, he asked Hawkeye to give him a physical as a demonstration of his doctoring. Hawkeye took the physical seriously, despite continuing to joke, and that more than anything probably convinced Korshak to let him remain at the 4077th. Well, that and the fact that with Hawkeye around Korshak would probably be forced to stop smoking, stop drinking, and lose 20 pounds.

Radar’s B story, on the other hand, is terrible. I know we’re supposed to feel sorry for Radar when Mulligan returns and be impressed that Mulligan decided to return. But I don’t. Mulligan asking Radar to look after his girl is a little sleazy to begin with and that’s before Radar learns there’s a baby involved.

Just what exactly did Mulligan expect Radar to do? He asked him to be Mai Ping’s friend and to treat her nice. How long could Radar go on acting like as a surrogate husband to Mai Ping and a surrogate father to the baby? There’s no indication that Mulligan planned to support his Korean family once he returned to the States. He abandoned them. Radar was forced to steal food from the 4077th to feed them. Mulligan is not a nice guy.

It certainly doesn’t help that Radar’s naiveté is played up, particularly when Mulligan asks him to look after Mai Ping. Radar first wonders if Mulligan needs him to take care of a very precious, very beautiful gird. He’s then shocked and confused to discover Mulligan is talking about a real girl. 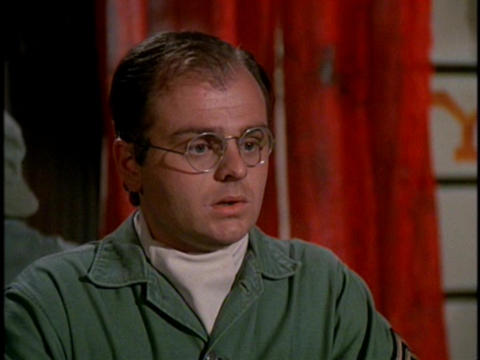 How uncomfortable does Radar look?

Father Mulcahy has exactly one line in this episode and it consists of just one word: “Mechanics?”.

I love Radar’s laugh in the mess tent as he walks past Hawkeye who’s saying “I’d be in the back seat of a ’46 DeSoto schnuggling with Wanda Lamperski.”

It’s unclear how long Radar was looking after Mai Ping and the baby before Mulligan returned. Was it a few days? A few weeks? Radar tells B.J. he worries if a day goes by and he doesn’t see the baby. But Mulligan was presumably leaving for Seoul right away. When he returns he tells Mai Ping he made it to Seoul before he realized he couldn’t leave her. That suggests it was a few days at most. Not nearly long enough for Radar to get so attached to his surrogate family.