Capsule Summary: The 4077th is in the middle of a heat wave and nobody can sleep except Colonel Potter, whose blissful slumber keeps being interrupted.

I really do not like hot weather and feeling hot, especially after becoming accustomed to air conditioning, so I can totally sympathize with everyone in this episode. Several years ago I spent a hot summer without air conditioning and it was unpleasant to say the least. Maybe that allows me to appreciate the episode more. At the very least, I think it makes it easier for me to give all the characters a pass for being so grumpy.

Take B.J.’s plotline, for example. Sometimes his frustration, anger, and worry about being so far away from his family feels a little repetitive. It’s understandable but the writers may have gone to that well a few times too many over the years. Not in this episode. He’s hot and sweaty and hasn’t slept for who knows how many days. B.J. can be forgiven for overreacting to the news that the gutters back home are clogged.

Hawkeye’s reaction to B.J.’s overreaction is likewise understandable. He also is hot and sweat, hasn’t been sleeping, and has watched B.J. read and re-read the same letter countless times without being told what it contains. When he finally finds out what’s going on, it seems so inconsequential that he just can’t believe it. Things only get worse when they’re in surgery and B.J. has somehow decided that Peg doesn’t need him anymore. Hawkeye’s response is perfect: “You are a complete idiot! No wonder Peg is leaving you!”

With the exception of Father Mulcahy, all of the other characters also have relatively decent plot points tied to the heat. Klinger is taking apart the P.A. system to learn how to repair TVs, Margaret is dealing with a case of prickly heat, and Charles is sorting through three years of tax and financial documents in the mess tent. Father Mulcahy, however, just seems bored and rather than work on a sermon or read a book he decides to bother Charles.

I often suggest that dropping a particular plotline from an episode may have improved it overall but in this case I’m not so sure. Even though I don’t think Father Mulcahy added much to the episode, cutting him out would have meant lengthening one of the other plotlines and I don’t think any of them would have benefited from being longer. 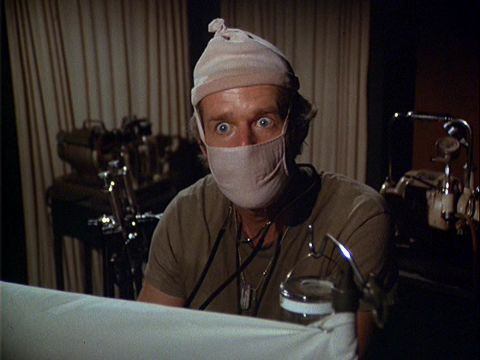 B.J. worries about the handyman

Colonel Potter says Klinger is “totin’ around a permanent vicuna coat” that makes him even more susceptible to heat. I had to look that up. The vicuna is a South American animal related to the llama, known for its fine and expensive wool.

I’ve never taken a sleeping pill so I don’t know how realistic it is that Colonel Potter would be so confused and out of it after being woken up time and time again.

I feel like I’ve said this before but Igor’s conversation with Charles may be the most he had to say in a single episode.

Given how little Hawkeye has to do in this episode, until I went back and checked I thought perhaps Alan Alda directed this episode.

16 Replies to “Episode Spotlight: No Sweat”