Capsule Summary: The 4077th has been struck by the flu, leaving Hawkeye the only doctor still standing.

I hesitate to use the word boring for this episode but it really was pretty uneventful. There’s no plot to speak of other than the flu epidemic forcing Hawkeye to take on all surgical duties in the O.R. while Margaret insists on taking charge of all things administration. The flu also places several characters outside their comfort zones and this is makes up the bulk of the episode.

Father Mulchay, for example, is called upon to do more than just pray and console the wounded. Despite not knowing what any surgical instruments are called he steps up. Margaret likewise has to handle more of surgery than she’s used to and performs admirably under pressure. For the most part everyone does well, except for that one moment when everyone in the O.R. was calling for Hawkeye. Even Radar is called into assist in surgery, although in his case the responsibility goes to his head.

We do get some nice moments between Hawkeye and Margaret, particularly their discussion in the Swamp about who is in charge and later their differing views on administrating flu shots. Henry’s slow slide out of his chair after attempting to take back command is hilarious. And Frank’s delirious ramblings about his wife Louise and his receptionist Nancy are amusing.

The final scene in the O.R. bizarre. It’s a mix of shots of surgery and surgical tools with random news reports being read over the PA system. I’m guessing it was intended to show that the 4077th does indeed carry on no matter what, that surgery will continue and lives will be saved regardless of how many doctors are sick or who is in charge. It just feels like a weak ending, even if it isn’t actually the end of the episode. 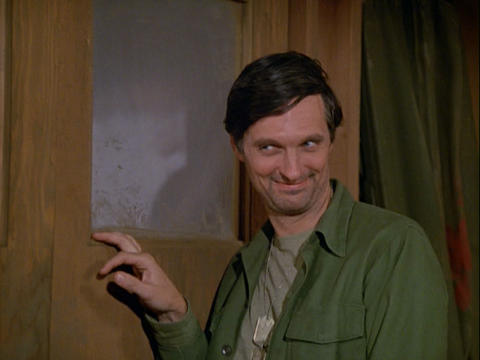 Hawkeye is sick but can still joke around

Lynnette Mettey plays Nurse Sheila Anderson in this episode despite having appeared in three earlier episodes as Lt. Nancy Griffin. She would reappear in “The General Flipped at Dawn” (Season 3) and “Some 38th Parallels” (Season 4) again playing different characters. I wonder why she didn’t just keep playing Lt. Griffin?

While Hawkeye is on the phone with the unnamed general, Radar hands him an orange coffee cup with “HANK” written on it as well as the University of Illinois “I” logo. It’s a nice little prop that helps add to the atmosphere of Henry’s office.

Regular background actor Marcia Gelman has a larger-than-usual role in this episode as Nurse Jacobs, who helps get Henry back to his tent.

I hope somebody from the cast or crew kept the roll of toilet paper signed by the entire camp as a token of appreciation. It would make for an interesting memento.

Klinger doesn’t appear in this episode, which is too bad because I’m sure he could have found a way to use the flu epidemic as a Section 8 stunt.