Capsule Summary: Hawkeye and B.J. hope to take Charles for all he’s worth at the poker table only to discover he’s far better at cards than they thought.

There’s only one storyline in this episode, with numerous plot threads that lead up to the big poker game, all related to money: B.J. needs $200 for a down payment; the military screws up pay day; Colonel Potter needs $50 to buy Sophie a blanket; Hawkeye has tapped out his tab; Margaret is worried about her allowance.

While it’s nice that everyone fits into the storyline rather than there being several unrelated storylines, it still feels like some of the characters (Margaret and Colonel Potter) were shoehorned into the script, while others (Father Mulcahy, Klinger, and Radar) are little more than afterthoughts.

I actually felt sorry for Charles at the end of this episode. Sure, he’s smug and his demands of B.J. and Hawkeye are petty, but the glee with which everyone took advantage of him at the poker table was pretty extreme. It’s one thing to realize that a card player has a tell and use it to beat them. To do it with such joy, to relish it the way they did, was something else entirely.

It’s also impossible to believe that someone like Charles would have an obvious tell like whistling loudly. At the start of the game he was playing incredibly well. There’s no way he could have gotten that good if he announced via whistle when he had a bad hand. Of course, I’m of the opinion that Charles was a brilliant poker player who tricked everyone into assuming he was inexperienced. If, on the other hand, you think he just had an incredibly run of beginner’s luck, the whistling might seem more plausible.

A highlight of the episode is the story Charles tells B.J. about property his family once owned:

Dad owned some property like that once out on the Cape. Hyannis Port. Gee, we loved to go there. Then this large family moved in next door. Nouveau riche. Played a perpetual game of touch football on their lawn. Naturally, we moved out.

The large family he refers to, one obsessed with touch football? None other than the Kennedys. It’s a wonderful reference that you might just miss if you’re not familiar with the location of the Kennedy Compound on Cape Cod.

Other highlights include Charles explaining how he doesn’t sweat, he perspires (and he doesn’t perspire) as well as his incredulous “Are you implying I should clean up?” when Hawkeye suggests he tidy the Officers’ Club. 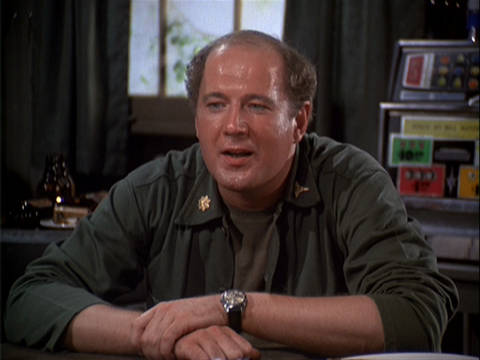 “Are you implying I should clean up?”

Hawkeye uses the title of this episode in conversation while complaining to B.J. about Charles.

I don’t recall B.J. and Peg’s plot of land ever being mentioned again after this episode.

Where did the huge tray of sandwiches at the poker game come from? Hawkeye said the game was starting in ten minutes. That’s not a lot of time to pull together a few dozen sandwiches. There’s also a tray of what look like chicken wings.

9 Replies to “Episode Spotlight: The Merchant of Korea”