Capsule Summary: Radar decides he doesn’t want to go home, leading to a confrontation with Hawkeye. Eventually, he decides to leave, and the 4077th plans a going away party.

Thanks to the random number generator that decides which episodes I review each Monday, it’s been over 11 months since I reviewed “Good-Bye Radar (Part 1)” back in December 2013. Much of that review and the ensuing comments focused on Gary Burghoff’s performance as Radar: not wearing his jeep cap, his unruly hair, and his voice sounding different. All of those factors are present in Part 2 as well, so I won’t be rehashing them here. He did actually wear the jeep cap in scenes in both episodes, but with the hair it didn’t fit quite right.

You have to give Burghoff credit for agreeing to return to M*A*S*H for his farewell episodes, considering he wanted to leave so badly at the end of Season 7. It’s too bad we’re saying goodbye to this particular version of Radar but at least we got to say goodbye. I think I prefer these episodes to no farewell at all, which is what we got with Trapper (and Frank, but his departure actually worked for the character). But it certainly would have been nice to see a less bitter, less tired Radar leave the 4077th one last time.

As was the case with Part 1, there’s not much to the plot. It’s odd that there’s next to no mention of Uncle Ed and how Radar is dealing with his death. The 4077th is still without a generator as Radar begins to pack for home. His decision to stay paradoxically seems both in and out of character. It’s not believable that this bitter, tired version of Radar would refuse the opportunity to leave Korea but I can see the other Radar (the “true” Radar, so to speak) being very conflicted about leaving.

Likewise, Klinger saving the day is both a nice bit of character growth as well as a plot point necessary to get Radar to leave. Klinger needed to come through for the 4077th in order to believe he could ever hope to fill Radar’s shoes as company clerk and it’s believable enough that a call could come in while Radar was unavailable, forcing Klinger to act. His scam to get the generator is pure Klinger.

Hawkeye confronting Radar about his decision to stay is a bit over-the-top. On the other hand, Colonel Potter telling Radar it’s time to go home later in the episode is very poignant:

Listen, Radar. I guess you realize I’m kinda fond of you. Lord knows, I’ve never met a soul I could depend on more. But above all that, you’ve been a damn good friend. Well, friend, it’s time we said goodbye. Time you got on with your life. You’ve come as far as you can go here. You’ve earned your wings. Now you’ve gotta fly.

The line “you’ve come as far as you can go here” could be referring to Burghoff as much as Radar.

Hawkeye’s salute is a nice farewell, as is Potter’s hug, Klinger promising to make Radar proud of him, Father Mulcahy giving him a blessing, and Charles calling him Walter. B.J. seemed more concerned about his family than Radar leaving. Margaret’s rushed goodbye (“You know, you’re okay”) is just bizarre. I guess she said everything she needed to when she randomly kissed him earlier in the episode. 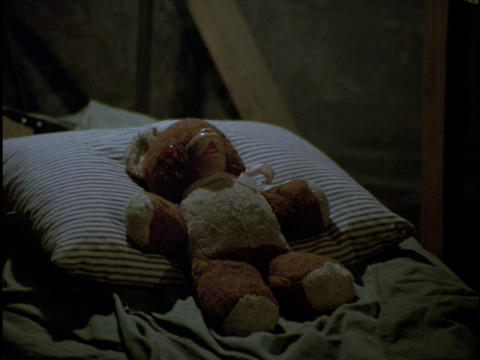 The bear he left behind

The opening scene to this episode featured some nice references to earlier episodes: the thermometer Colonel Blake gave Radar in “Abyssinia, Henry” (Season Three) and the purple heart he earned in “Fallen Idol” (Season Six). Continuity between episodes is always nice, particularly in pivotal episodes like this one.

B.J. and Radar’s farewell scene, in which B.J. explains that everything is confirmed for Radar to meet Peg and Erin in San Francisco, must have been written intentionally to set up “Period of Adjustment,” making it a rare example of foreshadowing in the series. “Period of Adjustment” was produced prior to this episode, so presumably at some point the scriptwriters all got together to ensure everything was set in motion.

Radar’s teddy bear makes its second-to-last appearance on M*A*S*H in this episode. When it is seen again in “As Time Goes By” (Season 11) it is a different bear.

When Margaret and Charles are chatting in post-op, and later when Radar is talking with Charles, there are Christmas cards on the bulletin board in the background.