Capsule Summary: B.J. falls off the fidelity wagon with a nurse whose marriage is falling apart. Meanwhile, Margaret worries when she learns Donald is in the hospital.

While rewatching this episode, I spent all 25 minutes certain that it ended with B.J. admitting to Hawkeye that he kissed Nurse Donovan and a surprised Hawkeye reacting with amusement because he couldn’t believe B.J. was so upset about a little kiss. So I was really surprised when instead the episode ended with Margaret on the phone with Donald. Talk about your false memories.

Both the major storylines in this episode worked well, with the latest saga in Margaret’s obsessive relationship with Donald and Frank’s obsession with Margaret complementing to a degree B.J.’s fall off the fidelity wagon. Margaret is perhaps a bit too shrill but her wild overreaction to Radar kissing her while half asleep fits perfectly at this point in her development, as does her initial acceptance of Frank’s friendship followed by angrily tossing him out of her tent.

Klinger confessing to being the Toledo Strangler in another failed attempt to get out of the Army, while totally pointless, is hilarious. Cutting it might have meant allowing the relationship between B.J. and Carrie to develop a little more prior to their night together. It’s implied that B.J. has been a shoulder to cry on while Carrie’s marriage was falling apart but things move really quickly once her Dear Jane letter arrives.

On the other hand, a deeper relationship between B.J. and Carrie would have fundamentally altered the episode. They weren’t emotionally involved. There was no slow burn between them, no sparks flying. They were just two lonely people, one hurting and one trying to heal, and things got out of hand. Left unsaid is exactly how out of hand things got.

We’re shown Carrie and B.J. embracing and passionately kissing and that’s it. The next morning, Hawkeye suggests that B.J. never returned to the Swamp. B.J. later tells Hawkeye he “fell off the fidelity wagon” but doesn’t explain what happened. If they only kissed, it seems like both Carrie and B.J. were making a big deal out of nothing. Even if they spent the night together in Carrie’s tent (why she had her own tent is another matter entirely) without anything else happening, would that really cause B.J. to feel so guilty?

While talking with Carrie later in the episode, B.J. says “I’ve never done that before,” implying they slept together, but then Carrie seems shocked when he tells her he feels like he betrayed Peg. She later says “I needed you that night and you were there. I’ll always love you for that. It doesn’t mean it’s never going to happen again.” If it was just a kiss, it must have been an incredible one if she’ll always love him for it.

In “War Co-Respondent,” B.J. all but confirms he slept with Carrie:

B.J.: “It’s the way I’m beginning to feel about her.”
Hawkeye: “Oh, come on Beej, we’re big boys. You went down this road once before.”
B.J.: “No, Hawk, you don’t understand. This isn’t like that. I’m not just talking about being unfaithful to my wife, which hasn’t happened with Aggie.”
Hawkeye: “What is it?”
B.J.: “Til Aggie showed up, I was convinced Peg was the only woman in the world for me. I never met a woman like her, she’s so different, so exciting.”
Hawkeye: “Uh-oh.”
B.J.: “Hawk, she’s all I can think about. And not just about being in bed with her. I think about being with her.”

Still, while it seems pretty clear, it’s ultimately up to the viewer to decide what they think happened between Carrie and B.J., which was obviously what Gene Reynolds intended with his script. 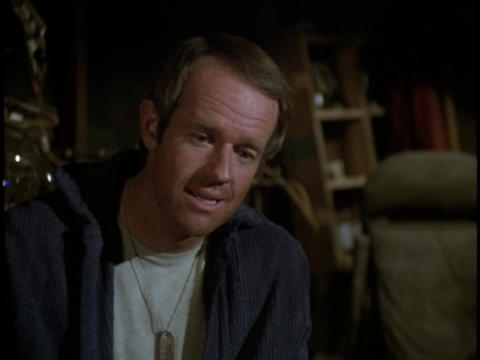 Was the scene in which Radar is dreaming about Betty Grable and kisses Margaret after she wakes him up often cut in syndication? I don’t remember any of it but it seems like a tough sequence to trim without removing Margaret’s call to Tokyo.

Notice that the length of the letter B.J. is writing in the Swamp changes throughout the scene. At first there are eight or nine lines while in a later shot only four or five. I wonder what Mike Farrell was actually writing.

Klinger is only wearing one earring in Colonel Potter’s office when he confesses to being the Toledo Strangler.