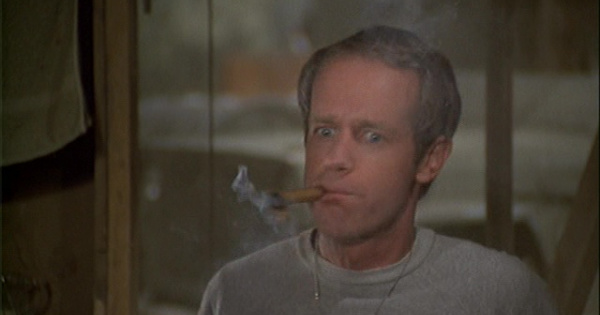 Capsule Summary: An old friend of B.J.’s stops by the 4077th and his practical jokes soon get out of hand. Meanwhile, Margaret tries to get a pass to Tokyo and Klinger pretends he has a camel.

Getting B.J. arrested wasn’t. If not for the hat that didn’t fit, B.J. could have been in real trouble. The “practical joke” tied up a pair of MPs who may have been needed elsewhere and, more importantly, it forced three doctors from the 4077th to leave for Seoul. B.J. had wounded in Post Op who needed care. What if more wounded had arrived while Colonel Potter and Hawkeye were gathering documents and driving to Seoul to meet with General Fox? Charles was nowhere to be seen in this episode, although presumably he was around.

B.J. taking Bardonaro’s travel orders was an okay gag, I suppose. But sending him off to Kimpo in a jeep without any gas could have been very dangerous. Having to walk back to the 4077th alone may not have been all that safe. Who knows what Bardonaro may have run into? Within the context of the episode, however, it is all fun and games. Even the $500 bill for damages that B.J. received was laughed off, leaving viewers to assume that Bardonaro returned safely to the 4077th, agreed to pay the bill, headed off to Kimpo and arrived back in the States.

I’m calling Margaret’s emotional plea for leave the B story of the episode. To me, it felt tacked on, an afterthought to give Margaret something to do. I guess we’re supposed to find it funny that Margaret is so angry and so upset but insists only that it is Donald who needs relief from his yearnings, never admitting that she has yearnings of her own. Am I the only one who thinks the scene in Colonel Potter’s office, just after Margaret yells at Radar, is cut rather abruptly?

That leaves Klinger and his camel as the C story. Klinger committed 100% to the scheme, as he so often did, but notice how other characters also react as if the camel was real. After Klinger explains that Habibi spit on the picture of Mrs. Potter, both Colonel Potter and Radar clean it off as if there really was camel spit on it. The best part of this storyline is definitely a drunk Colonel Potter calling Klinger “bugle beak” and giving the camel a discharge.

I don’t know what to think about Colonel Potter, Hawkeye and B.J. getting so drunk while driving back to the 4077th. It’s a bit much and it’s more than a little disturbing to see Colonel Potter so drunk that he falls down.

As mentioned earlier, Charles does not appear in this episode. It’s the only episode David Ogden Stiers wasn’t in after joining the series.

Klinger would later impersonate a doctor named Winston Habibi in a September 1984 episode of AfterMASH. In 2003, Jamie Farr and his wife Joy published a children’s book called Hababy’s Christmas Eve. You can read more about the book at Farr’s official website.

Hawkeye uses the phrase “Cheese it, the cops” when Father Mulcahy interrupts his conversation with a nurse in the Mess Tent. Apparently “cheese it” dates back to the 1800s. Who knew?