Capsule Summary: Father Mulcahy write his sister, telling her of his worries that he doesn’t make enough of an impact at the 4077th.

Last week I reviewed “Dear Mildred,” a letter home episode from Season Four that didn’t involve much writing. Today, thanks to the random number generator, I’m reviewing another letter home episode, this one from Season Seven, that also doesn’t involve a lot of writing. It is fitting that for an episode about Father Mulcahy, there’s a lot going on that only involves him passively.

The plot point that packs the most punch for Mulcahy is him slugging the unruly soldier. While watching the episode for this review, I found myself wondering why Mulcahy punched the soldier at all. Why was that his immediate reaction to being punched? Although an amateur boxer, Mulcahy wasn’t a trained fighter and he wasn’t in immediate danger when he punched the soldier, so I wonder how realistic it is that he would react that way.

Other than that, Mulcahy spent the episode hanging around the edge of effectiveness, as he put it. He wasn’t of much use in surgery, he couldn’t convince Charles to donate money to the orphans, he wasn’t able to complete his blessing for Edna and he didn’t help either Klinger or Margaret with their problems while tending bar (to be fair, that’s because they wouldn’t give him the chance).

And yet, he still managed to make a big impact on Charles simply by suggesting that Radar make a telephone call to Boston. Charles telling Radar about his Boston Christmases and later his reaction to receiving his old toboggan cap for Christmas are powerful scenes, as is the scene in which he thanks Father Mulcahy:

Charles: “You saved me, Father. You lowered a bucket into the well of my despair and you raised me up to the light of day. I thank you for that.”

I’ve noted before how I’ve grown to appreciate Charles, and the performance of David Ogden Stiers, more and more over the years. Conversely, things like Potter giving Radar his grandson’s pajamas for his teddy bear have grown increasingly difficult to hear. It’s one thing for a character who’s supposed to be young and dealing with the horrors of war to sleep with teddy bear. Having him dress the bear in pajamas is something else entirely.

The best part of this episode is the camp singing “Dona Nobis Pacem” after toasting Father Mulcahy for all he does without recognition. It’s a really nice performance, so nice that while I’d like to think that a group of people could spontaneously sing that well, I suspect there had to be both rehearsal and some coaching. I’d love to know if the song was filmed in one take or if took a few tries to get it perfect. And if there was additional singing filmed but cut from the episode. 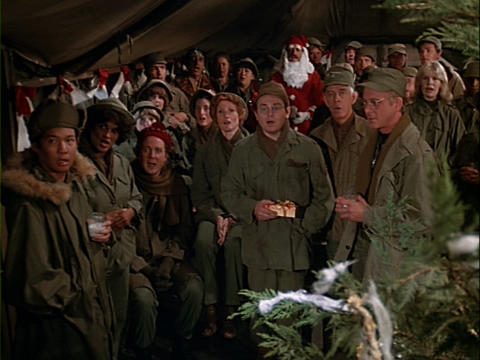 While they’re singing, Charles takes off his toboggan cap and Colonel Potter puts his arm around Radar. I often wonder if little things like this are planned, perhaps by director Alan Alda, or improvised by the actors. I doubt they’d be in the script.

There’s a lot of Christmas decoration in the background throughout this episode. There’s a manager scene and Christmas cards in Radar’s office, Christmas cards on the jukebox and strings of popcorn in the Officers’ Club, cards in Potter’s office and wreathes in post-op.

When Potter takes a drink from his glass in his office, Harry Morgan apparently tried to swallow too much, too fast. You can see liquid dribbling down his chin.

The freeze frame in this episode has no music, which giving it a quiet, introspective feel.