“There Is Nothing Like A Nurse” (#58, 3×10)
Originally Broadcast: Tuesday, November 19th, 1974
Written by Larry Gelbart
Directed by Hy Averback

Capsule Summary: The nurses of the 4077th are evacuated due to the threat of attack, leaving Hawkeye, Trapper and the other men lonely and bored.

For an episode with only one real storyline, this episode has a lot going on. It features the second of three appearances by troubadour-surgeon Captain Calvin Spalding with two original songs written and performed by singer Loudon Wainwright III. It also features a home movie of Frank’s wedding, which Larry Gelbart later called one of his “favorite sequences” from M*A*S*H. Plus, the return of 5 O’Clock Charlie. And it includes several unusual cinematic techniques: an extreme close-up, dissolve transitions and a split screen.

Captain Spalding first appeared in “Rainbow Bridge” (originally aired September 17th, 1974) and following this episode appeared for the third and final time in “Big Mac” (originally aired February 25th, 1975). I’ve always thought “It’s Funny How We Miss Them” was the best of Spalding’s songs. For the record, the other song in this episode, first heard near the beginning with Hawkeye and Trapper singing along, is titled “Unrequited to the Nth Degree.”

The home movie of Frank’s wedding are hilarious but also sad. Frank really is a pathetic character both in the Army and in civilian life. In a March 2001 post to the alt.tv.mash Newsgroup, Larry Gelbart had this to say about the wedding film:

Remember mostly how much fun it was shooting Frank’s wedding movie. A good opportunity to see Frank in a civilian setting, see what a fool he was there, as well. And what a nice break it afforded us to get away from the war for awhile.

All in all, one of my favorite sequences.

I don’t know how I feel about the extreme close-up of Margaret’s mouth during her conversation with Henry about Nurse Baker. I don’t recall offhand any other examples of extreme close-ups. Was Henry, due to his hangover, zoned out and seeing her talk without listening? I turned the laugh track on and there’s laughter during the close-up but it doesn’t seem particularly funny.

The flashbacks seen while Spalding was singing “It’s Funny How We Miss Them” in the Officers’ Club, complete with dissolve transitions to indicate they’re flashbacks, seem a little unnecessary. Between the lyrics and the looks on Hawkeye and Trapper’s faces, I think we get the idea. That said, it was a nice reuse of the “running nurses” from the opening credits.

On the other hand, the split screen used during portions of the telephone conversation between Frank and Margaret was very effective because it allowed viewers to see the contrasting facial expressions. Again, I don’t remember any other uses of a split screen on the series. 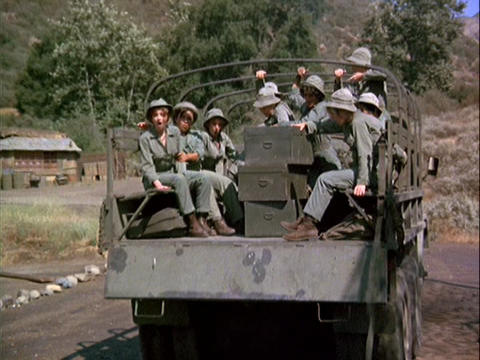 The nurses on their way to safety

As for the plot of the episode, other than the minor detour involving Frank’s wedding movie, it was all about the impact of the nurses on the 4077th, both by their presence and their absence. Would Hawkeye, Trapper and the other men really have nothing to do only hours after the nurses left? Probably not.

I do wish there had been some resolution to the Nurse Baker plot point. Did Margaret actually go over Henry’s head? Was Baker forced to sit on the edge of her bed for a month? I wonder if the lack of closure was Gelbart’s intent when he wrote the script or if there were additional scenes cut from the episode. It could be that we’re supposed to assume that after being evacuated, Margaret had second thoughts and decided to let Baker slide.

It’s interesting that the actress who portrayed Baker in this episode isn’t credited, despite having a number of lines. It’s definitely not Bobbie Mitchell, who is credited as Nurse Able.

11 Replies to “Episode Spotlight: There Is Nothing Like A Nurse”