Capsule Summary: A general visiting his wounded son sets up shop at the 4077th temporarily. Meanwhile, Margaret develops laryngitis days before she is supposed to meet a famous doctor in Seoul.

This is another episode where I really like one of the two storylines a lot more than the other. In this case, it’s the General Collins storyline that I like and Margaret’s laryngitis storyline that doesn’t really do much for me.

What I like best about the General Collins storyline is that it was allowed to unfold. It wasn’t just a half hour of Hawkeye and/or B.J. ranting and raving about the inhumanity of a general sending men to fight and die only minutes after learning his own son had died. General Collins was no General Lacy (“Preventative Medicine”) or Colonel Buzz Brighton (“The Ringbanger”). In fact, Hawkeye never says a thing after hearing the general talk on the phone. All we see his the expression on his face: part confusion and part disbelief.

If you look closely, when Collins says “I don’t have any choice!” while on the phone, you can see tears in his eyes. Otherwise, we didn’t get very emotional after learning his son was dead. We as viewers get the impression he’s a very stoic, controlled man. His interactions with his son in Post-Op weren’t particularly warm. His son always referred to him as “Sir” and one suspects that wasn’t because they were both in the military. 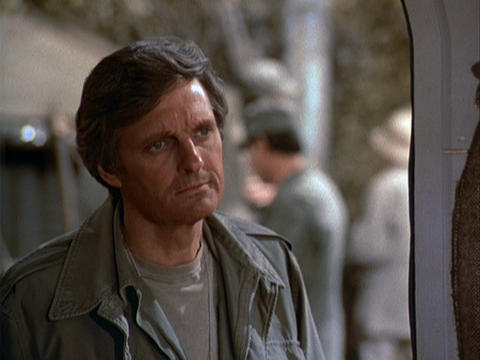 Margaret’s laryngitis storyline was obviously an attempt to balance the episode. The General Collins storyline was heavy and dark so the episode needed something light and humorous. Unfortunately, as was often the case, the two storylines are so different that the episode ends up feeling disjointed. It didn’t help that Margaret’s home permanent looks ridiculous, despite what the men of the 4077th seemed to think, including Father Mulcahy.

That said, it’s always nice to see Charles being kind and considerate. He spent much of the episode insulting Dr. Chesler but in the end came through for Margaret.

I don’t watch M*A*S*H with a laugh track anymore. Are there a lot of laughs in this episode?

I spent the entire episode trying to figure out why the actor playing General Collins (John Anderson) looked — and sounded — so familiar. It turns out he was in several episodes of The Twilight Zone, including “The Odyssey of Flight 33” and “The Old Man in the Cave,” and those guest appearances are where I had seen him before. His voice is very distinctive.

Was Klinger in this episode? I didn’t see him. Both B.J. and Father Mulcahy don’t have much to do.

At the start of the episode, Margaret is singing “Let a Smile Be Your Umbrella, a song from the 1920s that was recorded by Bing Crosby in 1957.

Potter refers to Dizzy Dean while in surgery. Dean was a baseball player during the 1930s.