Capsule Summary: While Margaret prepares for an inspection, Hawkeye is forced to reevaluate how he sees one of the nurses at the 4077th.

I’m of two minds about this episode, specifically the main storyline involving Nurse Kellye and Hawkeye. The concept works in theory but in execution it falls flat. It was nice to see a minor character get a chance to shine and I suppose it was a fitting way to kick off the final season of M*A*S*H (even if this episode was filmed during the tenth season but held until the eleventh). But why would Kellye care so much that Hawkeye didn’t treat her like all the other nurses? If anything, she should have been happy he wasn’t constantly pursuing her.

Prior to this episode, we never saw any hint that Kellye was hurt to be overlooked by Hawkeye. Actually, we didn’t really know much about her at all. So to suddenly learn so much in one episode was a little overwhelming. Maybe it would have made more sense if she was just disgusted at the way Hawkeye continually hounded the nurses at the 4077th, rather than personally hurt that he wasn’t hounding her.

Hawkeye’s behavior in this episode was a reflection of the strain the series was under having been on the air so long. Although within the confines of the series the characters had only been in Korea for a year or two, at most, viewers had been watching them every week for over a decade. At some point, after a few years, Hawkeye’s skirt-chasing stopped being amusing and started being uncomfortable. The tuxedo only made things worse. It didn’t help that Alan Alda had aged a decade since the series began. 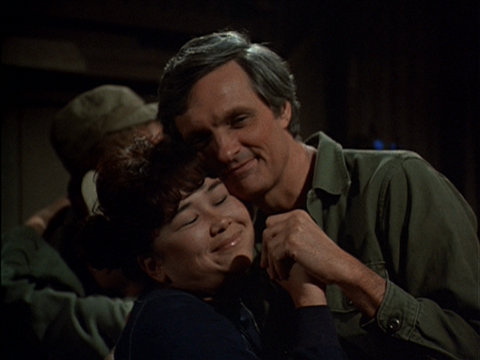 The B storyline featuring Margaret dealing with the unexpected inspection felt repetitive at best.

In “Memories of M*A*S*H,” Kellye Nakahara states that Burt Metcale and Alan Alda brought the script for this episode to her and asked if she was interested. She was.

This episode was the late Susan Oliver’s directorial debut and one of only a handful of episodes directed by a woman. Oliver is best known for her acting, including a role in the original, unaired pilot episode for Star Trek in 1964. Her only other directing credit is an episode of Trapper John, M.D..

32 Replies to “Episode Spotlight: Hey, Look Me Over”