Capsule Summary: Hawkeye and Margaret are sent to the 8063rd to demonstrate a specialized surgery and wind up behind enemy due to shelling.

This was the first of three two-part episodes of M*A*S*H, meaning it originally aired on CBS as two half-hour episodes on two consecutive weeks rather than an hour-long special later split in two for syndication.

Both this episode and “Comrades in Arms, Part II” were jointly directed by Alan Alda and Burt Metcalfe. I wonder how that worked. I have a feeling I’ve read an explanation somewhere — could it be that they each directed one episode but because it was a two-part episode were credited for both — but can’t remember where.

The arterial transplant surgery that Colonel Potter asks Hawkeye to demonstrate at the 8063rd was taught to him by Dr. Borelli in “The Consultant” from Season Three. It could have been any random surgery but instead was a callback to an earlier episode, providing a little continuity for the series.

Likewise, the minor subplot to the episode involving Charles and his continuing quest for a transfer away from the 4077th was a running storyline throughout Season Six (and beyond). Although the phone call with the general who mistakes Charles for Klinger was amusing, I have to wonder exactly what Charles hoped to accomplish talking to a random general. 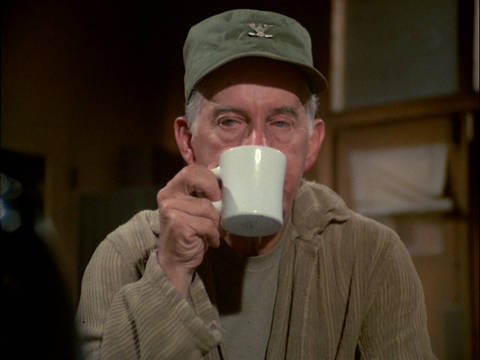 A nice moment comes when Hawkeye and Margaret first take shelter in the abandoned building. Margaret is at first impressed by Hawkeye’s knowledge of forward observers, registration points and benchmarks (learned, he claims, by watching the fictional Abbott and Costello Meet Hitler) but then a moment later accuses him of knowing “absolutely nothing about soldiering” when he decides to go out into the open to treat the wounded soldier.

Colonel Potter refers to Hawkeye as Skeezix when they’re going through the supplies to be traded at the 8063rd for penicillin. Skeezix is a character from the comic strip “Gasoline Alley.”

Radar does not appear in this episode and Father Mulcahy has just one brief scene at the end, worrying about Hawkeye and Margaret.