Capsule Summary: Hawkeye is eagerly anticipating the arrival of a visiting Swedish doctor but his excitement turns to frustration when she shows him up in the O.R.

For a show set in the early 1950s that went off the air more than three decades ago, very little about M*A*S*H feels dated. Some of the cultural references from the 1950s might not make sense today and some the hairstyles seen in the latter seasons are as equally out place now as they would have been in the 1950s, but by and large the episodes have stood the test of time.

“Inga” is one exception. It aired less than three months before the original March 22nd, 1979 deadline for states to ratify the Equal Rights Amendment and is very obviously a product of its time. Viewers then would have watched it through a lens very different than those watching just five or ten years later, let alone more than three decades later in 2013.

Today, watching Hawkeye and Charles get so worked up over being upstaged by a strong-willed, intelligent doctor who just so happens to be a woman seems laughable. Was it equally laughable to viewers back in 1979? Or was that the point, that 1950s-era sexism had no place in 1979 America? If there’s anyone reading this who saw “Inga” when it originally aired on CBS please hit the comments with your thoughts.

There’s a fundamental problem with this episode entirely separate from its archaic take on gender roles. Hawkeye’s dual realization that his male ego is far more fragile than he thought and that he may not view women as equally as he thought came a few seasons too late. Had this episode aired during the second or third season, when Hawkeye was at the height of his womanizing, perhaps it would have made more of an impact. 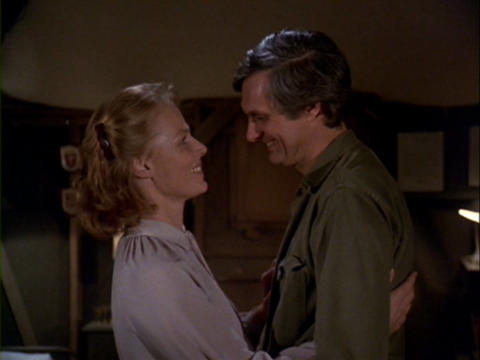 Likewise, Margaret confronting Hawkeye about the way he treats women is a case of too little, too late. The show had been on the air for seven seasons and only now she had a problem with him? Her comment about replacing his “fabulous lips” with “a soggy piece of liver” was a nice touch, though. I have to believe Alda included that line as a call back to Hawkeye’s famous “river of liver” speech from “Adam’s Ribs” during Season Three.

The highlight of the episode has to be Klinger’s interaction with Inga, in which she offers to help him finally become a woman:

Klinger: “To tell you the truth, I don’t belong here. If two doctors will sign a form, I’ll be able to go home. And so far, I’ve got all but both of them.”
Inga: “You know, I may be able to help you.”
Klinger: “Oh, you can? You mean it?”
Inga: “Yeah, well, I have a colleague in Copenhagen who does sex-change operations.”
Klinger: “Yeah? What’s that?”
Inga: “Well, you would finally be transformed into a woman. It’s very sophisticated surgery, but, uh, it’s possible.”
Klinger: “You mean, somebody– You mean, take a knife and– and–“
Inga: “Yeah.”
Klinger: “They’re crazier than I am!”

Mariette Hartley does a fine job portraying Inga, giving the character just the right mix of confidence and anxiety. To my uneducated ear, her Swedish accent seems spot on.