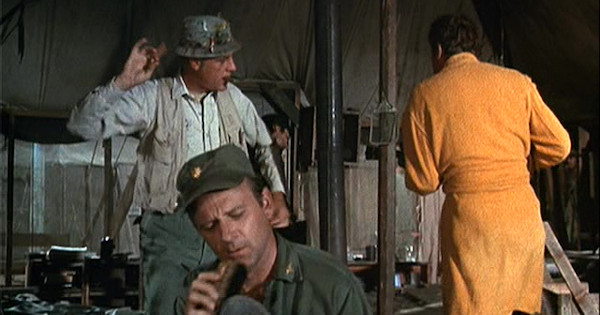 Capsule Summary: The 4077th must deal with a series of new rules from two-star General Hamilton Steele. When Steele comes to visit, they realize he’s nuts , particularly when he announces plans to move the camp closer to the front.

This episode marks the only time Harry Morgan appeared on screen with McLean Stevenson and Wayne Rogers. For his guest starring role as the unstable General Bartford Hamilton Steele, Morgan was nominated for a 1975 Emmy Award in the Outstanding Single Performance by a Supporting Actor in a Comedy or Drama Series.

Every line out of Morgan’s mouth in this episode is pure gold. The character of Colonel Potter was so different from General Steele and unfortunately never offered Morgan the opportunity to showcase the deranged hilarity he brought to this episode.

Steele’s bizarre, slightly inaccurate rendition of “Mississippi Mud” during Hawkeye’s preliminary hearing is without a doubt the highlight of the episode. I’ve always loved the tag scene in which Hawkeye, Trapper and Colonel Blake’s dance through and out of the Swamp while singing their own version of “Mississippi Mud,” leaving Frank shining his shoe in time to the music.

Other great moments include Colonel Blake trying to unfasten the door to General Steele’s jeep; Steele’s reaction to Klinger; Hawkeye pretending to be a reporter and Steele’s reaction; and Steele deciding to get lunch rather than staying to fight the snipers.

As recounted in “Memories of M*A*S*H,” it took seventeen takes to film the brief scene in which General Steele talks with Radar while inspecting the troops. Gary Burghoff and McLean Stevenson just kept cracking up at Harry Morgan.

24 Replies to “Episode Spotlight: The General Flipped at Dawn”