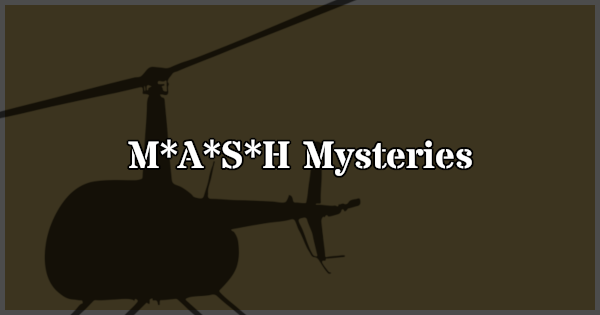 March 18th, 2016 Update: Video of McLean Stevenson in a raft shouting “I’m okay!” has been found. It wasn’t an episode of The Carol Burnett Show. It was a May 1975 episode of Cher.

Original Post: Last week, on the Thursday, June 23rd installment of Jeopardy! one of the clues during the first round was about M*A*S*H. The category was TV Toe Tags, about deceased television characters. None of the contestants were able to ring in with the correct answer. Here’s the $1000 clue:

After his sitcom alter ego died in 1975, this actor surfaced on “The Carol Burnett Show” in a raft, screaming, “I’m OK”

The answer? McLean Stevenson, according to host Alex Trebek. But is this clue true?

The story about Stevenson appearing on The Carol Burnett Show shortly after “Abyssinia, Henry” was originally broadcast, floating in a raft and waving his arms, has been around for as long as I can remember. But the only sources that I’ve ever seen, aside from M*A*S*H websites and random message board postings, are Wikipedia, the Internet Movie Database and TV.com. I admit that I have had it listed here at my site in the past, having seen it mentioned so many other times that I assumed it was true.

I have never been able to confirm that the cameo appearance by Stevenson actually took place. As far as I know, no one has ever come forward to say they actually remember watching it. “Abyssinia, Henry” was broadcast on Tuesday, March 18th, 1975. The Carol Burnett Show, which like M*A*S*H aired on CBS, broadcast its next episode on Saturday, March 22nd, 1975. Guests for the episode were Steve Lawrence and Sally Struthers. I’ve looked at some contemporary television listings and found no mention of McLean Stevenson; I also was unable to find any reviews or news stories mentioning the cameo.

Rob Kelly discussed this at his blog in January 2010 and someone in the comments suggested it might actually have been an episode of Tony Orlando & Dawn that aired on CBS the day after “Abyssinia, Henry” (on Wednesday, March 19th, 1975). I’ve also seen the story attributed to an installment of The Tonight Show Starring Johnny Carson at least once.

The only way to know for sure if the raft gag was real would be for someone to view the episode. As far as I know, it has never been released commercially on VHS or DVD. However, the UCLA Film & Television Archive has a copy of the episode in question. So, does anyone at UCLA want to take a look?

25 Replies to “McLean Stevenson and The Carol Burnett Show”