The Last Days of MASH is a big book. It’s about 11.5 inches wide and eight inches tall. And there are no page numbers, but I estimate it runs about 150 pages. I know it went through at least two printings because the copy I have is from the second printing. For some reason, in years past it seemed like used copies at Amazon and eBay were only available for about $25. I was able to get my copy for under $10 and lately I’ve seen copies available at both Amazon and eBay for under $5 (plus shipping).

In his introduction, Alan Alda notes that he was called on a Saturday morning in October of 1982 with the news that the M*A*S*H set at the Malibu mountains had burned down. He looked at his script for the final episode and tried to find something to work with. There is a photograph of Alan behind the burnt “best care anywhere” sign, which had partially fallen over and was leaning diagonally. The final episode wasn’t the last episode filmed, however, so the true “last days” of M*A*S*H took place during the filming of “As Time Goes By.” 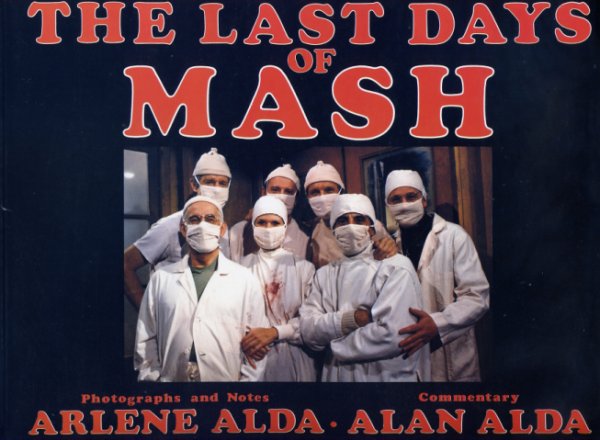 The book can be split broadly into two sections. The first section is filled with color photographs taken by Arlene Alda, photographer and wife of Alan Alda, during the filming of “Goodbye, Farewell and Amen” in October of 1982 as well as many more from the very last day of filming on Friday, January 14th, 1983. Included are both handwritten notes from Arlene and typed commentary from Alan. Here are a few of the many interesting tales recounted by Alan in the book:

“For eleven years we played doctor and, through it all, we took our fooling around seriously. In the first year, I loaned McClean Stevenson a book on the history of medicine. He studied it thoroughly. Months later, when he found someone by the side of the highway who had just been in a car accident, he remembered a passage from the book in such detail that he was able to reach into the open wound and pinch off the carotid artery until help came.”

“In the early years, the blood was okay. It had a nice color, and it ran well. Then the company stopped manufacturing it and the only theatrical blood you could buy was made with a base of caro syrup. It would probably have been all right on waffles, but it stuck to rubber gloves like glue. We tried making our own formulas, even mixing shampoo with red water color, but all that did was turn pink and foam all over us.”

“The night we taped our first episode, I worked in the control booth until one in the morning, swilling an entire bottle of champagne in celebration. The next morning, I was totally and completely sick. Fortunately, Wayne and I were playing a hangover scene that morning. We came out of the swamp and I kept walking until I got to the bushes and threw up all over Korea. Not one of my proudest moments. And to paraphrase Laurence Oliver–acting a hangover is much easier.”

Arlene shared a few fun facts as well (although I occasionally had a tough time deciphering her handwriting). For example, the steam in the shower scenes was fake. Alan usually had pizza and drinks delivered to the set every Friday after the week’s shooting was completed. William Christopher wore prop glasses in the series; he needed to use his actual glasses when reading. The cast liked to play a card game called Spite and Malice (also sold as Skip-Bo by Mattel) in the “shed” during breaks. I had read about the shed before but until reading The Last Days of MASH didn’t know exactly what it was. According to Alan, it was Gary Burghoff’s idea. Here’s what Alan had to say about the shed:

“It was a tiny room with bare bulbs and raw wooden walls, but it was a place where we could sit between shots and go over our lines together. After a couple of years, the drabness of the place started to get to me and I had fresh flowers delivered every week. The only snag with the shed was that every night the rats would come in to eat the chrysanthemums and pee on our chess board, We shared the room with some assorted props including bedpans and a couple of bloody dummies that doubled for wounded soldiers.”

The second half of the book is filled with a variety of production material, press clippings and notes. The “Behind the Camera” section includes photocopies of shooting scripts and call sheets from the last few days of production. There is also a reproduction of Alan’s handwritten ideas for potential titles for the final episode (“Curtain Time,” “It Was Great Fun,” “It’s Been Swell,” Does This Look Like Peace to You?” and “That’s all there is,” to name but a few). The “Storyboarding” section consists of 13 pages of Alan’s hand drawn storyboards for the final episode. 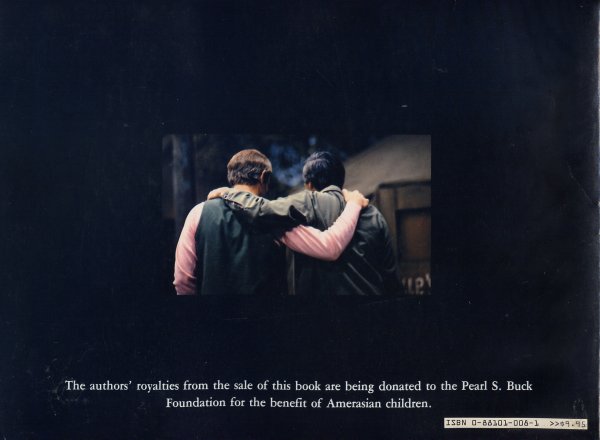 The Last Days of MASH Back Cover

The “Press/Cartoons” section features nine pages of editorial cartoons relating to the final episode as well as eight pages of newspaper articles. “Telegrams & Letters” is filled with thirteen pages of reproduced correspondence, including telegrams from Presidents Reagan, Ford and Carter as well as Henry Kissinger, Bill Paley and Max Cleland (former administrator for the Veterans Administration), plus letters from fans, including one in French, and a proclamation from the City of Los Angeles declaring February 28th “M*A*S*H Day” in the City of Los Angeles.

Finally, there is a postscript from Arlene Alda explaining how she got the assignment to document the last week of filming for LIFE (ten photographs were published in the March 1983 issue with text by Cindi Stivers). There’s a history of Korea, the Korean War, information about the Pearl S. Buck Foundation and brief biographies of Alan and Arlene. Then there are publishers acknowledgments, thanks and a page listing the staff and crew of the final season of M*A*S*H. The book is dedicated to “Amerasian children; innocent victims of real war” and according to the back cover “the authors’ royalties from the sale of this book are being donated to the Pearl S. Buck Foundation for the benefit of Amerasian children.”

I strongly urge any fan of M*A*S*H to pick up a copy of The Last Days of MASH. It is a wonderful look behind the scenes of the series. My only complaint is that it is too short and, obviously, only covers the last days of the series rather than all eleven years.

2 Replies to “Book Review: The Last Days of MASH”