I guarantee you I never would have noticed these mistakes in the third season episode “Springtime.” They have to do with Colonel Blake’s use of ham radio. I know next to nothing about ham radio but Adi, a licensed ham radio operator, was both knowledgeable and observant enough to recognize the following mistakes. In the episode, Colonel Blake contacts a ham radio operator in Des Moines, Iowa who agrees to help connect Klinger in South Korea with his bride-to-be in Toledo, Ohio so they can get married. Here’s the important exchange:

Henry: “Alrighty, BS2XYZ, I gotcha. That’s 6:00PM there, 4:00AM here. Righty-o, roger wilco, over and hour, ten-four and goom-bye. Okay, Klinger, you’re all set.”
Klinger: “Colonel, I could kiss you!”
Henry: “You do and I’ll chin myself on your nose.”
Klinger: “Are you sure this radio thing’s going to work, sir?”
Henry: Klinger, BS2’s a ham operator in Des Moines, Iowa, right? Now he’s gonna pick us up on his shortwave and call Laverne — your Laverne — at the chapel, collect, in Toledo, so he can patch her phone into his radio which we can hear on our radio and which Laverne can hear on her phone and her parents can hear on their extension. Simple?”

According to Adi there are two problems with the call sign BS2XYZ used by the unnamed ham radio operator in Des Moines. Call signs identify radio operators by the country of origin and area of operation. I don’t begin to understand how call signs work but you can read a little about call signs at this FCC page. The first problem with BS2XYZ is that the prefix BS has been allocated to China, so someone operating out of Iowa would not have used it. Second, the United States is split into geographic region — each assigned a numeral — and Iowa (along with Colorado, Kansas, Minnesota, Missouri, Nebraska, North Dakota and South Dakota) must have a 0 in it. 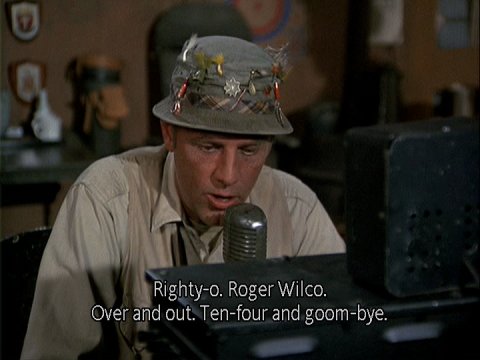 Later, during the wedding ceremony, Colonel Blake reveals that his call sign is KN5YVJ. Here’s what Adi had to say about this call sign:

The Korean code letters were HL & HM but some American military base ham stations abroad do use a US callsign. As it was never fully explained that MASH 4077 had any such station, I’m assuming that maybe Colonel Blake was using his own privet US callsign with military standard transmitter. But he was from Illinois and should use 9 in his callsign. However, as we know Colonel Blake as what he is, he is not strong with numbers.

Like most goofs, these mistakes had no impact on the episode itself. Most viewers probably didn’t even give the call signs a second thought. Anyone not familiar with the intricacies of ham radio call signs would never have known they were incorrect.