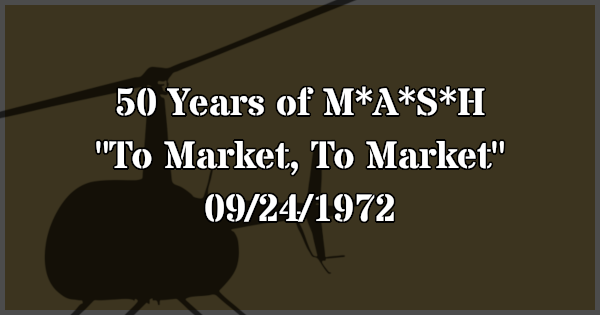 The second episode of M*A*S*H aired 50 years ago today. “To Market, To Market” aired for the first time on Sunday, September 24th, 1972 on CBS. Father Mulcahy doesn’t appear in this episode; Klinger has yet to be introduced.

When the Army won’t do anything about black marketeers stealing the 4077th’s much-needed hydrocortisone, Hawkeye and Trapper take matters into their own hands.

As I mention in my Episode Spotlight review, Larry Gelbart felt the background music in this episode was too too silly so he made sure it was toned down in future episodes. Maybe I should take a closer look at the music in “To Market, To Market” and compile a Music Breakdown for the episode.