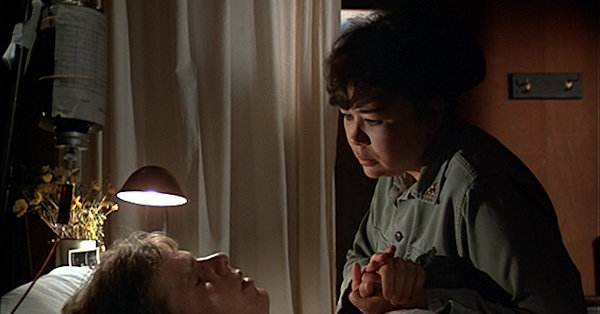 Actress and painter Kellye Nakahara passed away yesterday (February 16th) at the age of 72. She played Nurse Kellye in more than 150 episodes of M*A*S*H. Many of her appearances were uncredited. In fact, she’s only credited in 43 episodes, starting with “Hot Lips and Empty Arms” during Season 2 and ending with the series finale “Goodbye, Farewell and Amen” during Season 11.

In recognition of her connection to M*A*S*H, the Season 11 episode “Hey, Look Me Over” saw Nurse Kellye take center stage. (The episode was filmed during Season 10 but held over until the final season.)

After M*A*S*H ended, Nakahara continued acting sporadically with guest appearances on TV shows like Otherworld, Hunter, and Growing Pains. According to the Internet Movie Database, her last credited acting role was a May 1999 episode of Sabrina, the Teenage Witch; she later voiced a character in a December 2000 episode of The Wild Thornberrys.

In addition to acting, Nakahara was an accomplished painter. Learn more about her artwork at the Wow! Productions website or the Facebook page for the Kellye Wallett Studio.

Nakahara appeared in the 1991 documentary “Memories of M*A*S*H” on CBS. In April 2009, she joined Alan Alda, Wayne Rogers, Larry Gelbart, Loretta Swit, Mike Farrell, and others to help accept the Impact Award for M*A*S*H at the Seventh Annual TV Land Awards.

In April 2016, Nakahara was interviewed on NPR’s Weekend Edition Sunday. In April 2019, she was a guest on the M*A*S*H Matters podcast.

Obituaries can be found at Deadline Hollywood, CNN, and USA Today.