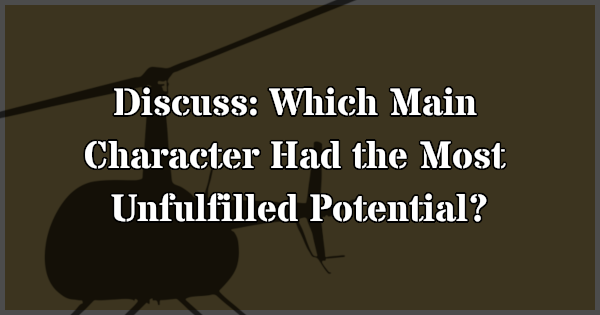 Today’s topic is: Which main character had the most unfulfilled potential?

Last week’s discussion topic asked readers which character that departed the 4077th they missed the most. Thinking about Trapper and Henry and Frank (and to a lesser extent Radar) got me thinking about what could’ve happened to these characters had they stuck around. We only got three seasons with Trapper and Henry, the fewest of any characters. Frank was around for five seasons and Radar for the better part of seven seasons.

So, today we’re discussing which main character had the most unfulfilled potential. It doesn’t have to be one of the four characters who left the 4077th. It could be anyone, even Hawkeye. But it does have to be a main character (so I can reuse this topic for supporting characters in the future).

Obviously, many fans will immediately point to Trapper and Henry because, as I mentioned, they were only on M*A*S*H for three seasons. These two characters had the least amount of time to evolve and change. (Back in May, we discussed which character grew the most on M*A*S*H. Nobody said Trapper or Henry.)

For me, it has to be Trapper. Maybe that’s because I’m such a fan of Wayne Rogers or because the character had so few opportunities to stand out. That’s not to say Henry was a well-rounded character by the end of Season 3 but he was definitely better defined than Trapper.

6 Replies to “Discuss: Which Main Character Had the Most Unfulfilled Potential?”