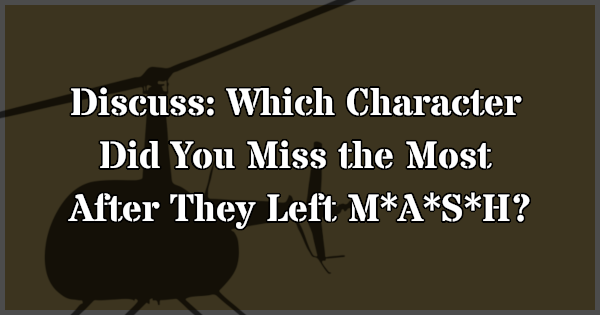 Today’s topic is: Discuss: Which character did you miss the most after they left M*A*S*H?

M*A*S*H survived the departure of four main characters during its 11 seasons on the air. Henry and Trapper left after Season 3, Frank left after Season 5, and Radar left partway through Season 8. They were replaced with new characters, with the exception of Radar. The producers and writers wisely decided to introduce very different characters rather than attempt to replace Henry, Trapper, and Frank with carbon copies. When Radar left, the decision as made to have Klinger take over his duties as company clerk and not add a new character to the show.

Each of these characters left a hole when they left. But which one did you miss the most after they let M*A*S*H? It doesn’t matter if you watched the show on CBS during its original 1972-1983 run or later in syndication or on DVD or streaming. If you’re a fan of the show, you probably wish one of the characters had stuck around more than the others. Why? Maybe because you liked the way the character acted or the way the character interacted with the other characters. Or maybe you just really liked the actor.

I think it’s going to be hard for anyone to say they missed Frank the most. That’s not a knock on Larry Linville, who did a wonderful job in a thankless role. It’s understandable why he wanted to leave M*A*S*H. As much as I like Henry, and McLean Stevenson, I think M*A*S*H thrived under Colonel Potter, even if Henry Morgan’s yelling was sometimes over the top. Poor Gary Burghoff was clearly tired of playing Radar by the time he left and for me that makes it difficult to miss the character.

So that just leaves Trapper. He’s the character I missed the most after he left the show. I think Wayne Rogers did a terrific job despite not having a substantial role in every episode. Like Larry Linville, it’s easy to understand why Rogers wanted to leave the show, although of course I wish he hadn’t. I like B.J. well enough but Trapper had a certain charm.

9 Replies to “Discuss: Which Character Did You Miss the Most After They Left M*A*S*H?”