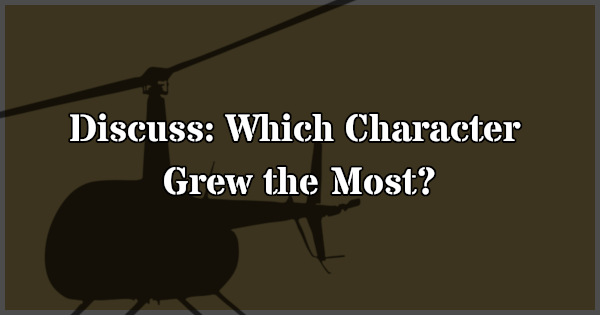 After a long break while I reviewed every episode of AfterMASH, Monday M*A*S*H Discussions have returned. These weekly posts give fans the opportunity to offer their opinions on a wide variety of topics relating to M*A*S*H. Please share your thoughts and ideas in the comments section. My hope is these discussion posts will continue to elicit comments in the weeks and months after they’re initially published. Have a suggestion about something you think might be worth discussing? Let me know and maybe it will become my next Monday M*A*S*H Discussion topic.

007 suggested today’s topic: Which character on grew the most over the course of the series?

I think most fans, when asked to consider which character on M*A*S*H grew the most, will immediately think of either Margaret or Klinger. You may not appreciate how either of these characters changed but there’s no denying they both grew dramatically as the show progressed. Hot Lips became Margaret while Section 8 Klinger became company clerk Klinger. None of the other characters evolved nearly as much, with the possible exception of Hawkeye.

Of the three, I think Margaret grew the most. She was always a dedicated nurse, even if it wasn’t as obvious during the early seasons because she spent so much time either fooling around with Frank or trying to get Hawkeye and Trapper in trouble. As her relationship with Frank cooled off, “Hot Lips” became “Margaret” and established her own identity. She wasn’t just Frank’s mistress or his partner in the fight to enforce proper military rules and regulations. It took time–and a marriage and divorce–for her to grow into her own.

Unlike Margaret, Klinger changed practically overnight when Radar left. Was it a big change? Yes, it was, but there wasn’t the same amount of growth, in my opinion. Klinger changed because of outside influences: he became company clerk and suddenly had a lot of responsibility. Margaret changed because of outside influences, too, like Frank leaving and later her marriage falling apart, but I think she also wanted to change and grow as a person.

8 Replies to “Discuss: Which Character Grew the Most?”