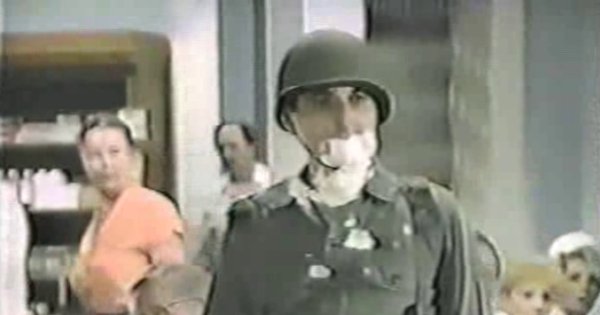 Klinger is trying to stay out of jail.

Potter writes a letter to Sidney Freedman, telling him everything that’s going on with Klinger. This is the third AfterMASH episode to feature a character writing a letter. Potter wrote to Klinger in the series premiere (“September of ’53”) and Klinger wrote to Radar in “Yours Truly, Max Klinger” partway through Season 1.

There are a number of storylines running through the episode. Klinger worries about General General’s new female psychiatrist, Dr. Boyer attempts to flirt with the new female psychiatrist, Potter tries to help a patient he operated on in Korea who refuses to speak, Wally Wainright upgrades the cafeteria menu in the hopes of keeping the patients calm, and Soon-Lee worries about Klinger.

As was often the case with “letter home” episodes on M*A*S*H, there’s just too much going on in this episode. Klinger’s storyline is solid, although I’m not thrilled to see him wearing costumes and impersonating people again.

The new psychiatrist is a breath of fresh air. She easily sees through Klinger’s scams. She’s convinced he’s sane but she’s still worried about him. What’s more, she’s strong-willed and easily stands up to Dr. Boyer. Literally. She stands up in the tub in the hydrotherapy room, covered only in suds, and scares Dr. Boyer away.

I like Potter’s storyline, too. He makes an impassioned speech in the hopes of getting through to his patient:

“Damn it, man. Why are you doing this to yourself? Korea’s over. Don’t let it kill you now. We want to help you but you’ve gotta speak up. Talk to me. I was there, I saw it too. You can’t give up. You can’t. If you’re hurt, cry. If you’re mad, make some noise. Do something. Anything. But don’t give up.”

The speech doesn’t work but a food fight in the cafeteria does.

Father Mulcahy makes a few appearances but isn’t heavily involved in any of the storylines. Likewise, Alma Cox, Wally Wainright, and Mildred each show up briefly. Soon-Lee is only in one very short scene.

Sidney Freedman is working at the University of Chicago.

Potter’s storyline connects directly to the 4077th. Klinger thinks he recognizes one of his fellow psychiatrist ward resident from the 4077th. Potter checks and, sure enough, the patient was at the 4077th. It was Potter who sewed him up.

In his letter to Sidney, Potter mentions the 4077th’s 98% recovery rate. He also asks if Sidney was at the 4077th the night Klinger hopscotched through the minefield.

This is the 11th of 13 episodes directed by Burt Metcalfe.

3 Replies to “AfterMASH Episode Spotlight: Madness to His Method”