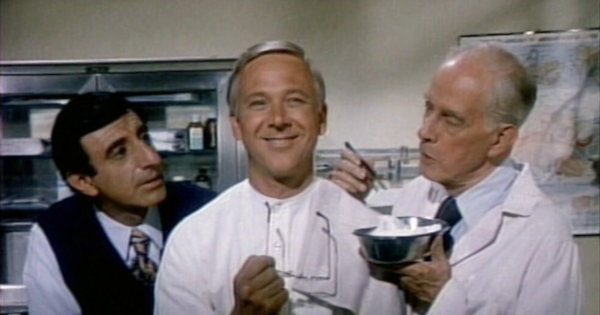 Hour-Long Series Premiere
M*A*S*H veterans Potter, Klinger and Mulcahy have turned their khakis in for civvies, but find that adjusting to civilian life isn’t exactly a snap. In the opener, Potter doesn’t want to mark time retirement, so he applies for a position at a VA hospital.

“Together Again” Summer Rerun
After ear surgery, Father Mulcahy goes on R-and-R at General Pershing, where Klinger is battling Alma to find a private room for a female patient.

One-Hour Series Premiere
Col. Sherman Potter, Sgt. Max Klinger and Father Francis Mulcahy, all veterans of the 4077th M.A.S.H. unit in the Korean War, find themselves back in the United States as civilians after the war’s end. The year is 1953 and Potter, Klinger and Mulcahy, who have each returned to their respective homes in Hannibal, Mo., Toledo, Ohio, and Philadelphia, Pa., discover that the transition to civilian life is not as easy as they had hoped it would be. Reprising their roles from M.A.S.H. are Harry Morgan, Jamie Farr and William Christopher.

“September of ’53” Summer Rerun
With the Korean War just ended, Potter finds himself back home but lonely for his old 4077th friends.

Imagine you’re a M*A*S*H fan in September 1983, sitting down to watch the special one-hour premiere of AfterMASH on CBS. You’ve been watching M*A*S*H for years, maybe since it began in 1972. You’re excited about the spin-off but also apprehensive. You don’t know if it can succeed without Alan Alda. You have high hopes for AfterMASH but part of you worries it will turn out to be a disappointment.

Honestly, I can’t put myself in that mindset. Hopefully, fans who did watch the premiere of AfterMASH back in 1983 will share their recollections.

It’s fitting the debut of AfterMASH uses a narrative structure very familiar to M*A*S*H viewers: the writing of a letter. But rather than writing a letter home, “September of ’53” starts off with Potter writing a letter to Klinger. We actually get to see Klinger reading the letter about halfway through the episode.

As the title suggests, “September of ’53” takes place in September 1953. Specifically, according to Potter’s letter, it begins on September 26th, 1953. Much of the first half of the episode consists of flashbacks as Potter recounts various events like returning home to Mildred and his brief return to private practice. By the end of the episode, Klinger and Soon-Lee have joined the Potters in River Bend, Missouri. “Together Again” picks up two weeks later and before long Father Mulcahy is living in River Bend as well.

Is it believable that Sherman Potter, Max Klinger, and Father Mulcahy all end up working at the General John J. Pershing Veterans Administration Hospital (better known by its nickname: General General)? I’m willing to accept it. It’s certainly believable someone with Potter’s experience would be asked to serve as chief of staff/chief of surgery at a VA hospital. It’s likewise believable that Potter would help his former clerk transition to civilian life. And I suppose he’d likewise do whatever he could to help his former company priest as well.

These first episodes of AfterMASH do what they’re supposed to. They introduce the characters and the setting of the new show and lay the groundwork for future episodes. Viewers, of course, were already familiar with Potter, Klinger, and Mulcahy. They probably remember Soon-Lee from the last two episodes of M*A*S*H. Mildred Potter was mentioned constantly on M*A*S*H, so she’s only half new.

“September of ’53” introduces viewers to two new AfterMASH characters. Mike D’Angelo (played by John Chappell) is hospital administrator at General General. He’s a bureaucrat’s bureaucrat, concerned with the bottom line and little else. Bob Scannell (played by Patrick Cranshaw) has been living at the hospital since 1918 due to exposure to mustard gas during World War I. Bob served under Potter, then a sergeant, and calls him “Sarge” rather than “Colonel” like everyone else.

Three more characters are introduced in “Together Again.” Dr. Gene Pfeiffer (played by Jay O. Sanders) is a resident, a young doctor who dislikes the rules and regulations he has to follow. Alma Cox (played by Brandis Kemp) is Mike D’Angelo’s executive secretary, a sarcastic woman who enjoys ruling over her underlings with an iron fist. Alma’s shy assistant, Bonnie Hornbeck (played by Wendy Schaal), takes an immediate liking to Klinger.

“September of ’53” includes a minor dramatic storyline in which Potter meets a troubled Korean War veteran. When the young man disappears from the hospital, Potter butts heads with D’Angelo over how to respond. Clearly, the two have very different views on how to run General General.

In “Together Again,” there are two minor medical storylines. Dr. Pfeiffer is uncomfortable treating a woman with VD and Klinger has to bend the rules to find her a private room. He’s succeeds but crosses Alma Cox, setting the stage for future confrontations between the two. Once Father Mulcahy arrives at General General, he meets an African-American man who lost a leg. Suffering from phantom pain, the man claims he can’t wear a prosthetic leg. Mulcahy realizes the problem is the color of the prosthetic and has it painted brown. Potter uses Mulcahy’s success helping the man to convince him to join the staff as resident Catholic priest.

There’s a lot packed into these two episodes. I can’t say I laughed once while watching the first two episodes of AfterMASH. Then again, I rarely laugh at any episodes of M*A*S*H after the first few seasons. Actually, I don’t find most sitcoms from the 1970s and 1980s very funny.

I’m not convinced Larry Gelbart intended these two episodes to air back-to-back. Unlike the five hour-long episodes of M*A*S*H, which used the same title (i.e. “Welcome to Korea” or “Bug Out”), these episodes have two separate titles. CBS likely decided to air the first two episodes as an hour-long special to draw viewers to the premiere of AfterMASH. The network later aired them separately during the summer of 1984.

Although AfterMASH takes place in the fictional Missouri town of River Bend, there is an actual village in Missouri called River Bend with a population of 10 people.

Both episodes include a handful of references to 1950s culture and politics. The Potters are watching an address by President Eisenhower at the start of “September of ’53.” Near the end of “Together Again,” Mildred mentions Bishop Sheen, a Catholic bishop who hosted radio and television programs from the 1930s through the 1960s. And Father Mulcahy refers to Uncle Miltie, a nickname for the popular comedian Milton Berle.

A brief scene from the end of “Together Again” was included in the 2003 documentary “M*A*S*H: Television’s Serious Sitcom,” which aired as part of cable channel A&E’s Biography series.

There are multiple references to the 4077th and the Korean War in both episodes. In “September of ’53,” Potter says his MASH unit moved 23 times. Later in the episode, Klinger tells a judge about his time in Korea:

Made me a medic, an orderly, a clerk. And most of what they told me to do I couldn’t unless I lied a little, stole a little. Somebody’d grab ya and say, “The ambulance is full. Corporal, go get a truck.” Only you ain’t got a truck. So you run down the road and you see a driver from some other outfit in the woods with a copy of Stars and Stripes and his pants are down and then suddenly you got a truck. Get you a laugh in the Army. Here it gets you two years.

In “Together Again,” Father Mulcahy thinks of a joke Hawkeye once told him (“Korea, first cousin to ‘Dia’.”) after waking up from surgery to restore his hearing.

Lois Foraker, who guest stars as Nurse Coleman in “Together Again,” appeared in four episodes of M*A*S*H between 1976 and 1978 as various nurses. Nurse Coleman is a recurring character during much of the first season of AfterMASH and at least one episode during the second season.

Wikipedia claims, without evidence, Kellye Nakahara is the unseen voice giving announcements at General General over the PA system. I’ve been unable to find any sources backing this up. It certainly sounds like her:

Can anyone confirm whether or not this is the voice of Kellye Nakahara?

12 Replies to “AfterMASH Episode Spotlight: September of ’53/Together Again”