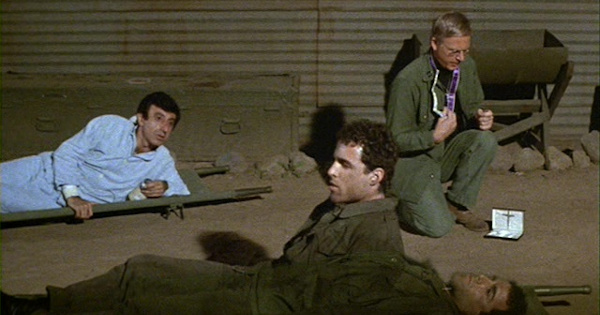 Capsule Summary: A feverish Klinger interacts with a dead soldier who wanders through the 4077th trying to come to terms with his death.

I’ve always thought of this episode as M*A*S*H meets The Twilight Zone. I’m sure I’m not the only one to make the comparison. It’s an apt one, given that the episode involves the “soul” or “ghost” of a dead soldier leaving his body and walking around the camp. Only Klinger, suffering from a high fever, can see and hear the deceased soldier.

As the title suggests, the episode isn’t about the dead soldier, not really. It’s about how petty the living can be. With the exceptions of Father Mulcahy and Colonel Potter none of the characters are depicted well in this episode. Hawkeye, B.J. and Margaret in particular are shown at times to be selfish and inconsiderate, while Charles is seen to be argumentative and stubborn.

There are two endings to this episode. The first sees Weston and a group of other dead soldiers walking off to their final destination and the other in which Klinger’s fever breaks and he tries to get somebody to tell him what happened to Weston, to no avail.

Notice that during the first ending, the one with the “souls” or “ghosts” heading down a dirt road, there are a few people not wearing army fatigues. Are they supposed to be civilians? Chinese soldiers? North Korean soldiers?

The second ending ties back the characters being inconsiderate and selfish. They either don’t remember who Weston is or are too self-absorbed to be bothered to answer Klinger.

It’s a heavy-handed episode, to be sure. And for many viewers it may have been a bit too much. It wasn’t the dead soldier’s “ghost” or “soul” walking around that went too far for me, though. No, where the episode went wrong was having Klinger be able to talk to Weston.

Margaret’s angry soliloquy outside Post-Op after kicking a trash can is bizarre, ostensibly one-sided but awkwardly written to match Weston’s musings.

Father Mulcahy’s story about being a champion at Spin the Bottle when he was 12 years old is a good one.

I wonder if it was difficult to film this episode, with so many scenes involving Weston talking to or at characters who weren’t supposed to react to him at all.

The scene in which Weston climbs out of his dead body is a rare example of an optical special effect on M*A*S*H.

35 Replies to “Episode Spotlight: Follies of the Living-Concerns of the Dead”