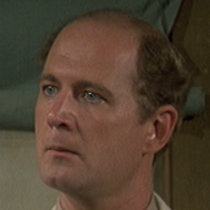 David Ogden Stiers, who played the snobbish Charles Emerson Winchester III, passed away today at the age of 75. He had been battling bladder cancer. Obituaries can be found at The Oregonian and Variety. I know the entire M*A*S*H fan community joins me in extending condolences to the family and friends of David Ogden Stiers for their loss.

Stiers began his acting career in the 1970s. Between 1976 and 1977, he guest starred in three episodes of The Mary Tyler Moore Show as station manager Mel Price. Burt Metcalfe happened to see one of these episodes and decided Stiers would be perfect for the role of Charles Emerson Winchester. Stiers joined the cast of M*A*S*H at the start of the show’s sixth season in the fall of 1977. His character replaced the inept and buffoonish Frank Burns (played by Larry Linville). Winchester was the complete opposite of Frank Burns: a gifted surgeon from a wealthy Boston family who loved classical music and the finer things in life.

Scriptwriter Ken Levine wrote about how Stiers helped refine the accent he’d use for Charles at his blog in October 2007:

We met with him [Stiers] the day before production began and discussed the character. He asked if he should do a Boston accent. He tried it, reading a portion of the next day’s script. We said it was good but we were concerned it would be a little hard to decipher. He said, “Well, let me back it off a little.” He read the same passage again and was perfect. We said, “That’s it!” And he did that, for every episode, the accent never slipping or changing. We knew we had a jewel.

In the Season 6 premiere (“Fade Out, Fade In”), Winchester is initially sent to the 4077th as a temporary replacement but by the end of the episode, he’s assigned there permanently. He makes it very clear how he feels in a memorable speech:

“But know this. You can cut me off from the civilized world. You can incarcerate me with two moronic cellmates. You can torture me with your thrice daily swill, but you cannot break the spirit of a Winchester. My voice shall be heard from this wilderness and I shall be delivered from this fetid and festering sewer.”

Throughout Season 6, the writers worked to get a better handle on the new character. In “The Winchester Tapes,” Charles tells his parents about the horrible conditions at the 4077th. In “Change Day,” he tries to rip of South Korean civilians when the military introduces new money. In”The Merchant of Korea,” he lends B.J. money, only asking for a few small favors in return. In “The Smell of Music,” he feuds with Hawkeye and B.J. by insisting on practicing the French horn in the Swamp. And in “Dr. Winchester and Mr. Hyde,” he starts taking amphetamines to stay one step ahead of the rest of the camp.

My favorite Charles episodes are those that showcase his kindness and his warmth. He’s arrogant, yes, and occasionally greedy. He can be petty and jealous and rude. But he’s also secretly cares about other people. Episodes like “Dear Sis” (Season 7), in which Father Mulchahy and Radar work together to give Charles the perfect Christmas gift, his old toboggan cap; “Morale Victory” (Season 8), in which he helps a talented pianist come to terms with losing an arm; “Letters” (Season 9), when he writes a heartfelt letter to a little girl who sent him a birch leaf; “Death Takes a Holiday” (Season 9), when he carries on his family’s holiday tradition of donating expensive chocolates; “Sons and Bowlers” (Season 10), when he bonds with Hawkeye; and “Run for the Money” (Season 11), in which he befriends a soldier who stutters.

After the end of M*A*S*H in 1983, Stiers continued acting. He had roles in the popular miniseries North and South and North and South, Book II on ABC in 1985 and 1986. Between 1986 and 1988, he appeared in eight made-for-TV movies based on the Perry Mason legal drama. In 1991, Stiers voiced Cogsworth in the animated movie Beauty and the Beast, beginning a successful career as a voiceover artist, voicing characters in movies like Pocahontas, The Hunchback of Notre Dame as well as TV shows like Justice League, Lilo & Stitch: The Series, Teacher’s Pet, and Regular Show. He also lent his voice to a number of video games.

In 1998, he had a regular role on the ABC sitcom Two Guys, a Girl and a Pizza Place, although his character was soon phased out. His next regular TV role was Love & Money, a short-lived CBS sitcom that aired briefly during the 1999-2000 season. From 2002 to 2007, Stiers had a recurring role on The Dead Zone as well as a recurring role on Stargate: Atlantis from 2006 to 2007.

Stiers made numerous guest appearances over the last several decades on shows like Alf, Murder, She Wrote, Matlock, Wings, Star Trek: The Next Generation, Cybill, Dr. Quinn, Medicine Woman, The Trouble with Normal, Touched by An Angel, Frasier, Worst Week of My Life, and Rizzoli & Isles.

According to the Internet Movie Database, he last acting credits were in 2017: a movie called Neil Stryker and the Tyrant of Time and a TV movie called The Joneses Unplugged. Outside of acting, Stiers was also a talented conductor. He served as resident conductor for the Newport Symphony Orchestra in Newport, Oregon.

Update – Scriptwriter Ken Levine has posted a tribute to David Ogden Stiers at his blog. “David rarely gave interviews about his time on MASH,” Levine writes. “He didn’t want to just be remembered for that show. In documentaries and articles he always declined to participate. But I know he was intensely proud of his contribution to MASH.”

All of us at the NSO are heartbroken. David Ogden Stiers was a generous, loving, and inspirational friend and pillar to our orchestra, and, indeed, to all of us individually. Our orchestra would not be here if it weren’t for his great support and inspiration over three decades. His depth of musical feeling, love for our musicians, and charisma made his performances soar when he was on our podium. We will all work to keep David’s spirit alive in all of our performances.

David Ogden Stiers. I remember how you skateboarded to work every day down busy LA streets. How, once you glided into Stage 9, you were Winchester to your core. How gentle you were, how kind, except when devising the most vicious practical jokes. We love you, David. Goodbye.

If you can’t read it, here’s what he wrote:

David Ogden Stiers. I remember how you skateboarded to work every day down busy LA streets. How, once you glided into Stage 9, you were Winchester to your core. How gentle you were, how kind, except when devising the most vicious practical jokes. We love you, David. Goodbye.