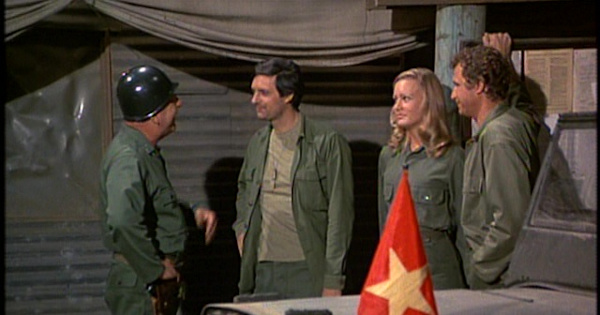 “For the Good of the Outfit” (#28, 2×04)
Originally Broadcast: Saturday, October 6th, 1973
Written by Jerry Mayer
Directed by Jackie Cooper

Capsule Summary: Hawkeye and Trapper try to force the Army to admit to shelling a South Korean village.

It’s not often Frank ends up saving the day but that’s exactly what he does in “For the Good of the Outfit.” If he’d gone along with Hawkeye and Trapper from the start, signing their report about the shelling of Tai-Dong, all of the shell fragments and x-rays and medical records would be in the hands of Major Stoner. For once, his cowardice came in handy. His refusal to rock the boat is the only reason General Clayton grudgingly had to agree to reveal the truth to the public.

I wish a little more time had been spent on the Major Stoner misdirect. He surprises Hawkeye (and, presumably, viewers) by claiming to admire the courage it took to report the Tai-Dong incident. Hawkeye is impressed enough to hand over the shell fragments he and Trapper collected, alongside the x-rays and medical profiles. Clearly, at this point in the episode, Hawkeye believes Major Stoner truly does intend to pursue the investigation.

In the very next scene, however, the truth comes out. Hawkeye tells Frank he hasn’t been able to get Major Stoner on the phone for over a week. Then Trapper reads in Stars and Stripes that Tai-Dong was shelled by enemy artillery. It’s a cover-up. Radar finally manages to get through to Major Stoner, who assures Hawkeye he intends to go all the way to the top. Hawkeye knows he’s lying. The Army doesn’t want the truth about Tai-Dong to come out and, unfortunately, Major Stoner has all the evidence.

For reasons that are never explained, the Army only seems to care about Hawkeye. His mail is stopped. He’s placed under arrest. Nothing happens to Trapper even though he signed the report alongside Hawkeye. Also, despite Hawkeye’s initial anger at having his mail stopped, there’s no outrage about him being placed under arrest. It’s never mentioned again.

Here’s another potential plot hole: Why does General Clayton drop by the 4077th? Nobody calls him. Hawkeye intends to, but he’s told the general is already on his way. What is Clayton worried about? Why does he feel the need to confront Hawkeye and Trapper personally? As far as he knows, Major Stoner took all their proof that the Army was responsible for shelling Tai-Dong. He must also know that Hawkeye hasn’t been able to tell anyone and won’t be able to as long as he’s under arrest.

Obviously, for the purposes of the episode, Clayton has to be at the 4077th at just the right time for Frank and Margaret to storm into Colonel Blake’s office with their own report about Tai-Dong. Also, having a general threaten to transfer Hawkeye and Trapper to an aid station near the front lines is arguably more terrifying than a random major.

Hawkeye receives a letter from his father dated May 24th, 1951.

Gwen Farrell makes her first credited appearance on M*A*S*H as Nurse Butler in this episode. Despite the credit, she has no lines. She’s seen briefly in the background when Hawkeye and Trapper walk to the Swamp after talking with Henry. She’s giving Igor a manicure. Jeff Maxwell is uncredited for his appearance as Igor. Also uncredited is Marcia Gelman, who is cutting Igor’s hair.

When Clayton arrives at the 4077th, watch closely and you’ll see his driver has a mustache. Is this Dennis Troy as the driver?

Also, when Clayton greets Hawkeye and Trapper in front of the bulletin board, standing between them is an uncredited Sheila Lauritsen. Trapper is clearly whispering in her ear when Clayton walks back to speak with Hawkeye. I wonder what Wayne Rogers had to say.

23 Replies to “Episode Spotlight: For the Good of the Outfit”