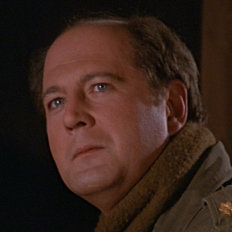 Capsule Summary: Everyone at the 4077th chips in give the orphans a delicious Christmas meal except Charles, who tries to carry on a family tradition in secret. Meanwhile, B.J. goes to great lengths to keep a soldier alive.

I’ve long referred to “Death Takes a Holiday” as one of my favorite episodes. Is it perfect? No, but few (if any) episodes are. What makes the episode noteworthy, in my opinion, is how strong the A and B stories are. Both are emotional and powerful.

Charles and his chocolates are the A story, introduced at the start of the episode when Charles receives a third big package from home. He later donates a small tin of expensive oysters to the orphan’s dinner, offending Klinger, B.J., and Hawkeye. It’s classic Charles–selfish and snobbish–and completely believable.

But Charles has a surprise: he’s donating expensive chocolates to the orphans and insisting on anonymity. It’s a family tradition, one that clearly means a lot to Charles. That’s why it infuriates him when he spots Rizzo eating a piece of his expensive, donated chocolate. Charles confronts Mr. Ho, spitting mad, but quickly learns the truth:

Mr. Ho: “Please. Your generous gift and insistence that it remain anonymous touched me deeply. The candy would’ve brought great joy to the children for a few moments but on the black market, it was worth enough rice and cabbage to feed them for a month.”
Charles: “Rice and cabbage?”
Mr. Ho: “I know. I have failed to carry out your family tradition. And I am very sorry.”
Charles: “On the contrary, it is I who should be sorry. It is sadly inappropriate to give dessert to a child who has had no meal.”

Charles, upset, retreats to the Swamp. Klinger brings him a plate of food and Charles is initially cautious, convinced Klinger is getting his revenge for the oysters. but Klinger overheard the conversation between Charles and Mr. Ho, and quietly expresses his admiration:

Charles: “And what, pray tell, is the catch of the day?”
Klinger: “Oh, just one catch, Major.”
Charles: “Uh-huh.”
Klinger: “The source of this Christmas dinner must remain anonymous. It’s an old family tradition.”
Charles: “Thank you, Max.”
Klinger: “Merry Christmas, Charles.”

It’s a powerful scene, with a wonderful performance from David Ogden Stiers.

The B story is equally powerful, if somewhat unbelievable. Despite a Christmas truce, a solider hit by sniper fire arrives at the 4077th. He’s a goner but after Margaret finds a picture of his wife and kids, B.J. insists on trying to keep the soldier alive until midnight. “If we can delay it long enough,” he tells Hawkeye and Margaret, “his kids won’t have to think of Christmas as the day their daddy died.”

There are two problems here. First, I suspect the soldier’s kids will be just as distraught about him dying on December 24th as opposed to December 26th. Every year, for the rest of their lives, they’ll associate the Christmas holiday with their father died. Does it matter if he died on Christmas Eve or Christmas or the day after Christmas? I don’t think so but maybe it does. I don’t know.

The second problem is why B.J. struggles to keep the soldier alive rather than simply falsify his death certificate. Margaret and Hawkeye clearly have a problem with going to such extremes to keep a mortally wounded man alive–although they go along with the plan. Ultimately, their efforts fail. Hawkeye forces B.J. to let the soldier die and let Father Mulcahy do his job. Hawkeye then literally moves the clock forward. The soldier, he announces, died on December 26th. 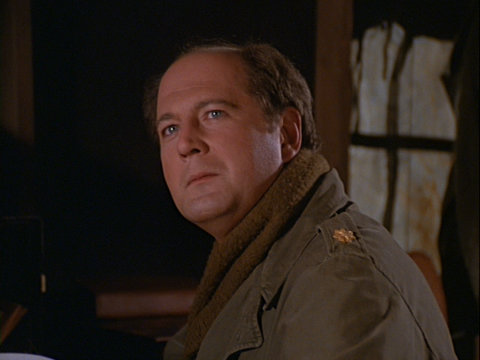 During the Christmas party, Igor snubs Charles while passing out cookies. Charles must know why he’s being shunned, and by the look on his face it obviously hurts him. He doesn’t say anything. Keeping his family tradition a secret is more important. It’s a quick interaction, but adds a little depth to Charles. He does care about what others think of him, despite how he acts. Or, perhaps he just really wanted a cookie.

I’m surprised Rizzo appears so afraid when Charles grabs him and demands to know where the chocolate bar came from. It’s not often Charles scares anyone.

Why don’t Hawkeye, B.J., and Margaret put on scrubs at some point while working on the wounded soldier? They’re not even wearing gloves.

Six writers were involved in crafting this script. The story came from writing partners Thad Mumford and Dan Wilcox (the two are credited with an ampersand between their names) with additional input from Burt Metcalfe (who is credited with an “and”). The actual script, or teleplay, was written by Mike Farrell, John Rappaport, and Dennis Koenig. Their names are listed without ampersands or an “and”, which suggests to me they each wrote a separate draft.