Capsule Summary: While the USO brings entertainment to the 4077th, Henry awaits word of the birth of his son back in the States, a paranoid dentist worries about getting home safe, Trapper and others carry out a tough surgery, and Hawkeye is the butt of Frank’s practical jokes.

I’m not going to lie. I’m not a big fan of this episode. I really don’t like the USO segments but the rest of the episode is fine. Jackie Flash is annoying. The Miller Sisters are okay but the USO segments interrupt the flow of the episode. At times, it feels incredibly disjointed with limited interplay between characters. At other times, the characters and storylines fit together perfectly.

Which of the five unconnected storylines is the best? Henry’s baby? Trapper’s surgery? Captain Kaplan’s paranoia? Frank pulling practical jokes on Hawkeye? Father Mulcahy worrying about his impact at the 4077th? I think Henry’s storyline is probably the strongest and the most substantial. The way he finds out about he birth of his son, his conversation with Hawkeye, kissing the South Korean baby. It’s depressing to hear him worry about not meeting his new baby until his son gets drafted because, as we all know, Henry never does meet his baby boy.

It may seem a little strange that Hawkeye doesn’t have a storyline of his own but I like the ensemble feel of the episode. He participates in the Henry and Trapper storylines. He also gets his revenge on Frank in a scene reminiscent of the famous shower scene in the movie MASH.

I haven’t done the math but I’m guessing the USO segments eat up at least five minutes of the episode. That’s a lot of time that could’ve been spent expanding Father Mulcahy’s storyline or giving Margaret more to do in Trapper’s storyline. Or even given Frank more time to pull pranks on Hawkeye.

Following the tag scene when Hawkeye gets his revenge, there’s another scene in which the main cast is credited on screen, followed by the closing credits. I don’t know why M*A*S*H did this several times during the first two seasons. In this case, perhaps it was a small way to acknowledge the cast in the event CBS didn’t renew M*A*S*H for another season. 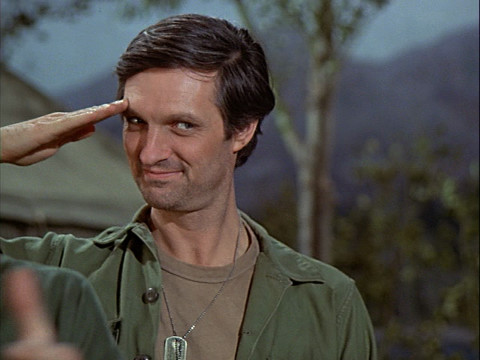 This was both the final episode produced for Season 1 and the final episode aired by CBS. That means it could have been the last time viewers got to enjoy M*A*S*H, had CBS not renewed it for a second season. I wonder what the cast and crew wrap party was like after filming wrapped? Were people too worried about getting renewed to celebrate? Did the party wind down with everyone saying goodbye, unsure if they’d be back together in a few months?

Just after Ugly John says “It doesn’t look good, Trapper” you can see Margaret’s lips moving but you don’t hear her say anything unless you really turn up the volume. She says “You did your best.” In the same scene, Hawkeye calls Father Mulcahy over for some “cross action.” That same phrase is also heard in the pilot episode.

Trapper is seen reading a book in the audience during one of the USO scenes. Maybe Wayne Rogers was bored during filming and decided to do a little light reading (although knowing his financial interests, he may very well have been reading a book about economics).

Sheila Lauritsen makes her second credited appearance in the series in this episode, offering Captain Kaplan a farewell kiss that he refuses. Oksun Kim, who played the unnamed Korean woman with the baby, later guest starred in “As Time Goes By” during Season 11. Gwen Farrell, Roy Goldman, and Dennis Troy all appear uncredited.

Hawkeye’s sarcastic salute to Frank in the tag scene was used heavily FX promos for the series.