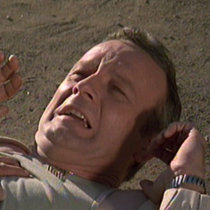 Capsule Summary: Frank inadvertently pushes Margaret to ask Donald to set a date for their marriage and the whole camp pulls together to celebrate the impending nuptials.

Like every episode of M*A*S*H involving a cast change, it’s difficult to disassociate “Margaret’s Marriage” from its larger role in the series–in this case being the final episode in which Frank Burns (and Larry Linville) appear. It also plays an important part in the continuing evolution of Margaret Houlihan. Plus, there are some fans who might consider it a turning point for the series, marking the end of the two-year transitional period between seasons 1-3 and 6-11.

Ignoring all that, how does it rate as an episode? As a season finale? Personally, I think the story is solid, if basic, that unfolds almost too quickly. The first scene opens abruptly, with Frank complaining about Margaret’s eight-month engagement. He refuses to drop the matter, which results in Margaret placing a call to Donald and sets the stage for the eventual wedding.

Donald’s bachelor party is amusing, in large part due to Father Mulcahy’s continued use of the word “jocularity” while under the (limited) influence of alcohol. Is this only the second example of Mulcahy being drunk after “Alcoholics Unanimous” in Season 3? And if all the doctors were at the bachelor party, who was taking care of patients in Post-Op?

The lengthy basketball scene feels a little unnecessary and, unfortunately, makes the 4077th feel very small by involving the entire main cast (minus Frank and Margaret) as well as one random nurse. The wedding ceremony itself also feels quite small, in part because it was clearly shot at the studio. There are maybe 12-15 people in the audience. Even assuming a few nurses and other staff had to stay on duty, there should have been far more people in attendance. Other episodes feature meal scenes in the Mess Tent involving more people.

Frank serving as Donald’s best man is intentionally ridiculous. Clearly, Donald either has no idea that his wife-to-be had a lengthy relationship with Frank or he’s a cruel, cruel man who relishes the opportunity to force Frank to stand by his side while Margaret gets married. Beeson Carroll’s version of Donald is so much better than Mike Henry’s in “The M*A*S*H Olympics,” although the writers can probably deserve some of the blame for big dumb Donald in that episode.

It’s remarkable how little Hawkeye and B.J. contribute to this episode other than putting Donald in a cast. It’s hard to believe that Donald or Margaret would actually believe he actually broke his leg at his bachelor party. I’ve never broken a bone but I assume it’s quite painful. Not to mention a body cast for a broken leg is overkill and, more importantly, if his leg was really broken how could he be standing on it at the wedding?

Apparently when this episode aired in syndication, the tag scene was usually edited out, making Frank’s poignant “Bye, Margaret” the final shot. It’s a painful moment for Frank but one beautifully acted by Linville. It’s also the perfect ending for the character. The tag scene is awful by comparison and uncomfortable. Frank, Hawkeye, B.J., and Colonel Potter get worked up thinking about Margaret and Donald enjoying their wedding night? Yuck.

Frank is terrified of Donald.

I’m not sure exactly when Larry Linville announced he was leaving M*A*S*H. He may not have revealed his decision until after filming ended on Season 5, which would explain why he didn’t receive any sort of send-off during the season finale. In The Complete Book of M*A*S*H, Gene Reynolds says he may or may not have been aware that Linville wanted to leave after Season 5. Ken Levine has revealed that the writers wanted to give Frank Burns a proper farewell but Linville declined:

We were even going to do a special one-hour episode. But Larry didn’t want to do it. He was going through a bitter divorce at the time that took up all of his time and effort. We tried for months to get him to reconsider (appearing in our show, not reconciling with his wife).

I don’t recall what we had planned exactly, but it was a great way to transition Frank out and Charles in. You MASH fans would have liked it. I’m just glad we didn’t write the script.

Linville briefly mentions not wanting to return for a farewell episode at the start of Season 6 in The Complete Book of M*A*S*H. He explains that he left the series when his contract was up because he felt he “had done everything possible with the character.” The studio thought it was a negotiating tactic but he meant it when he said he was leaving. Linville felt the relationship between Frank and Margaret was integral to the series, so Season 5 must have been tough for him to get through. “After Gelbart left, it was easier to run Frank into a scene, dump on him, get a laugh, and run him out the door.”

One look at the script for this episode probably reaffirmed Linville’s decision to leave the series. Frank was reduced to little more than a clown who gets chased out of the mess tent and pinned to the ground then laughs hysterically after realizing he isn’t going to get beaten to a pulp. Frank later drunkenly screams “Stop laughing without me!” at Donald’s bachelor party and then passes out. It’s not pretty. It couldn’t have been easy for Linville.

Interestingly, “Margaret’s Marriage” wasn’t the final episode produced for Season 5, so it doesn’t technically feature Linville’s final work on M*A*S*H. There were five other episodes produced after it: “38 Across,” “Hanky Panky,” “Hepatitis,” “Movie Tonight,” and “Post Op.” Assuming, of course, that the episodes were actually filmed in the order they were produced, which has never been confirmed as far as I know.

Larry Linville wasn’t the only one to leave M*A*S*H after Season 5. Gene Reynolds stepped down as executive producer but remained with the series as a creative consultant for the rest of its run. Also leaving were producers Allan Katz and Don Reo.

Kellye can be seen sitting next to Klinger in the audience at the wedding. Igor is there, too.

Speaking of nurses, according to TV.com, Odessa Cleveland is in this episode. I don’t remember seeing her.