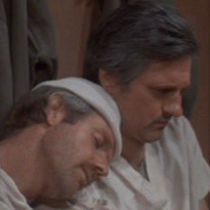 Capsule Summary: B.J. goes to great lengths to help a South Korean family while Hawkeye deals with an abrasive general.

There are some M*A*S*H fans who think B.J. is a one-note character. He misses his family and that’s about all there is to him. If you’re one of those people, you may not like enjoy episode because the A story has B.J. caring for a South Korean family. They’re suffering and B.J. is missing his wife and daughter so he turns the Koreans into a surrogate family.

In the process, B.J. definitely outdoes Trapper, who wanted to adopt a South Korean boy in “Kim” during Season 3. B.J. pretty much adopts an entire family. While treating the sick father, B.J. brings them food and blankets and repairs their roof. He’s even willing to bribe Zale to get supplies for them.

I don’t know if this was intentional or not but I love the moment when Kim Sing and B.J. get in the jeep and the girl begs him to go fast. We know there’s no way she got a ride from her village. At best she may have ridden in a cart. It’s much more likely she had to walk the entire way. So of course she wants to get back to her sick father as soon as possible.

The story line ends cruelly for all involved, with the Korean family abruptly leaving their village to seek safety further south. B.J. never gets to say goodbye. Left unsaid is whether the father will recover without B.J. to care for him. The family, whose lives are already miserable, must flee their home and never learn that B.J. has found their missing son. The son is transferred out of his unit to be closer to his family, only his family has moved, so he gets transferred for no reason.

B.J.’s emotional reaction to finding the village deserted is touching:

Hawkeye stands by and lets B.J. rant. He knows there’s nothing he can say to make his friend feel better.

The General Prescott B story is weak. Are we supposed to feel bad for him, getting injured over and over again, or laugh at him? Hawkeye clearly doesn’t like the general but we got no indication he’s ineffective or incompetent, although he did fall in a foxhole. At worst, he’s abrasive and selfish. 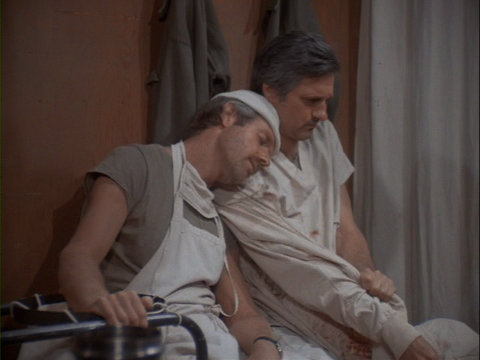 When the general’s aide introduces him as Brigadier General Marion Prescott, Hawkeye takes notice but Colonel Potter shuts him down before he can crack any jokes. Is Hawkeye amused that the general has what many would consider a feminine first name or is he remembering the fact that Frank’s middle name (in one episode, at least) was Marion?

This was the second of three episodes to guest star Dick O’Neill. He previously played Admiral Cox in “38 Across” (Season 5) and later returned as Colonel Pitts in “Sons and Bowlers” (Season 10).

Radar recognizing one of his bees and then trying to talk to it is a little too absurd for me.

I wonder if any additional scenes involving Charles and his date with Nurse Jacqueline Carew were filmed or at the very least scripted. Charles spends a lot of time preparing for the date only for it to be completely ignored.

A plane can be heard loudly overheard while B.J. is lamenting how unfair the world is. I wonder why the scene wasn’t shot again after the plane left.

Margaret, Klinger, and Father Mulcahy have tiny roles in this episode.