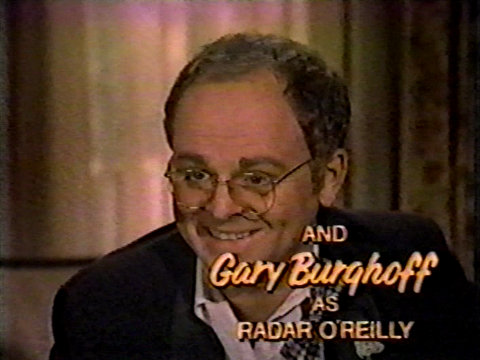 Here are the closing credits to the AfterMASH episode “It Had to Be You” from its original CBS broadcast on Monday, January 23rd, 1984. This was the episode that saw Gary Burghoff return as Radar after making a cameo appearance at the end of the previous episode.

AfterMASH occupied the 9-9:30PM during the bulk of the 1983-1984 season, its first, but “It Had to Be You” aired from 8-8:30PM because CBS aired the movie The Four Seasons from 9-11PM. The credits feature a CBS network voiceover for The Four Seasons as well as an episode of Newhart that aired from 8:30-9PM prior to the start of the movie.

At the very end of the closing credits you’ll notice the phrase “A Continuation of M*A*S*H” above the production number and copyright information. I’m not aware of any other TV spinoff that specifically referred to itself as a continuation the way AfterMASH did.

(The Four Seasons was written and directed by Alan Alda, who co-starred alongside Carol Burnett, Rita Moreno, and others. The movie was turned into a short-lived TV sitcom on CBS, which you can read about at Television Obscurities.)

One Reply to “It Had to Be You (AfterMASH) Closing Credits”