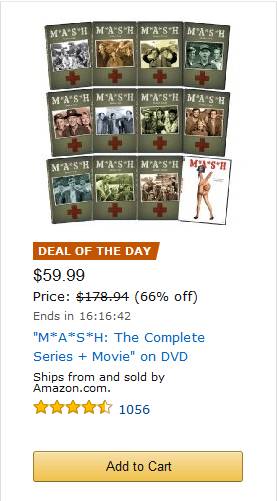 For today only, Amazon.com is offering all 11 seasons of M*A*S*H–plus the 1970 movie MASH–for just $59.99. The special “Deal of the Day” is NOT the Martinis & Medicine Collection from 2006 but rather a bundle of the individual season sets and the movie. Specifically, these are the 2008 repackaged season sets that were slimmer and greener than the original sets released between 2002 and 2006.

It’s likely Amazon has too many copies of the repackaged season sets and is hoping to get rid of some of its inventory with this special deal.

According to the listing, anyone buying this bundle will save $118.95 (or 66%) off the regular price of $178.94. However, based on my calculations, the individual season sets are selling for a combined $140.82 at the moment–and the movie can be purchased for just $5–so the savings aren’t quite as impressive.

Still, at just $60 the bundle averages out to $5.45 per season or roughly 24 cents per episode. I’m seriously considering purchasing the bundle as a backup for my Martinis & Medicine Collection. I’ve been considering buying a backup copy for years because I’ve noticed multiple episodes skipping on my DVDs.

The “Deal of the Day” price ends at midnight Pacific Time or 3AM Eastern; it only applies to Amazon.com and not any of its intentional websites.