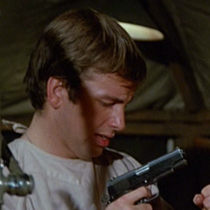 Capsule Summary: A poker game at the 4077th is interrupted by a traffic accident, a surgery, and a hostage situation.

This is a notable episode for a few reasons. First and foremost, it marks the first guest appearance by Edward Winter on M*A*S*H. It was the first of two episodes to feature Pat Morita. It was also the second episode to guest star Allan Arbus. As if that wasn’t enough, it also guest starred John Ritter.

The first four minutes of “Deal Me Out” are basically just setup for the reveal that the so-called “conference” mentioned numerous times is actually a poker game. I wonder if the episode could have opened with close-ups of all the characters saying their hellos, talking about a conference, and then pull back to show them hard at work playing poker in the Swamp. That way, the joke would still be there but those four minutes could’ve been used elsewhere.

The poker game acts less like a standalone story line and more like a waiting area for characters to get called away. First Colonel Blake gets called away to deal with the aftermath of Radar hitting a South Korean civilian with his jeep. Then Hawkeye and Trapper leave to operate on Lt. Rogers. Finally, just about everyone jumps up to respond to the gunfire in the compound.

That being the case, both Sidney Freedman and Captain Pak don’t add much to any of the storylines but do offer a lot of humor around the poker table. If I had to pick an A story, I’d have to go with Radar and “Whiplash” Hwang. I’m not a big fan of this storyline, to be honest. It’s a little over-the-top and drags on too long.

That would make Captain Halloran the B story, which is I do like. Halloran isn’t quite Flagg (more on that below) but he plays off of Frank well and offers my favorite bit of dialogue from the episode:

[Halloran sits down next to Klinger]
Halloran: “Hey, up close you’re a guy.”
Klinger: “Far away, too.”

Rounding out the episode is the Frank-Private Carter C story, which is hilarious. Larry Linville is at his whiny, gutless best throughout Frank’s confrontation with Private Carter in the shower. John Ritter, best known for his comedic roles, does a fine job portraying a traumatized soldier who can’t face a return to the front and thinks Frank is a heartless flag-waver. And how about Trapper sneaking into the shower and grabbing the gun? Hawkeye could never do something like that. 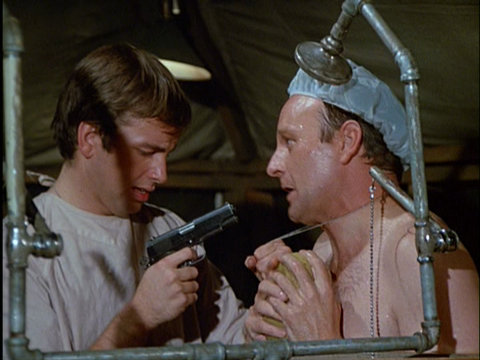 In this episode, Major Freedman’s first name is Sidney. In his first appearance earlier in the season (in “Radar’s Report”) his first name was Milton. According to Larry Gelbart in April 2004, the name changed because he didn’t think the character would return and while writing “Deal Me Out” couldn’t remember “what I’d called him the first time around.”

In May 2000, Gelbart gave some insight into how the script for this episode came together:

Not sure how quickly that one got written. Shows with more than one storyline were relatively easier to write. Doing short bits and then writing the connective tissue was a great way to work. Remember, though, that in addition to writing there were countless other production chores going on at the same time. It’s not as though one had a clear day to do nothing but simply write.

It’s clear that the character played by Edward Winter in this episode is not Captain Flagg, although many fans like to say Halloran was just another alias used by Flagg. But Halloran acts very little like Flagg, aside from vague paranoia and a gleeful desire to shoot Private Carter.

Pat Morita returned as Captain Pak in “The Chosen People” later in Season 2. I’ve never come across an explanation for why Morita didn’t make additional appearances on M*A*S*H the way Allan Arbus and Edward Winter did. Perhaps he was just busy.

Margaret and Father Mulcahy do not appear in this episode, although Mulcahy gets referenced by Colonel Blake.

16 Replies to “Episode Spotlight: Deal Me Out”