Capsule Summary: Desperately low on blood, the doctors and nurses of the 4077th struggle to care for wounded in Post-Op.

This was the penultimate episode of Season Five to hit the air but was actually the very last episode produced for the season. That means for viewers, “Post-Op” featured the second-to-last appearance of Frank Burns on M*A*S*H. But for the cast and crew, it was the last chance to work with Larry Linville as well as with Gene Reynolds in a producing capacity. Both would leave the series after Season Five, although Reynolds remained a creative consultant until the very end. It was also the last time Reynolds would direct an episode of M*A*S*H.

According to Ken Levine in a November 2011 post at his blog, he and writing partner David Isaacs wrote the script for this episode very quickly:

We were just handed the outline. That particular episode came at the very end of the season when lead-time was non-existent. We were brought in and asked to quickly write the script. That’s one of the MASH episodes I’m most proud of, because we did write it in only a few days, and they used probably 95% of our draft.

There isn’t much of a plot to “Post-Op” or storylines featuring different character. Instead, the wounded soldiers recovering in the Post-Op ward provide all of the action. I’m sure everybody has their favorite character. I’m partial to Corporal Robelo, the Puerto Rican soldier upset because his mustache was shaved off so his face could be stitched up.

Robelo should be thankful just to be alive, not complaining about facial hair that will grow back. On the other hand, he’s been wounded, may have seen buddies killed, and may have killed enemy soldiers. Maybe worrying about his mustache helps him cope with what he’s been through. Klinger seems to understand. His solution to the missing mustache? Make a fake one out of his own hair. It looks ludicrous but an initially skeptical Robelo likes it.

Other wounded include a young soldier Margaret talked to, who seemed unsure how to feel about having killed a young Chinese soldier; a mine layer who lost his leg after forgetting about booby trapped mines; a soldier embarrassed about being shot in the butt; a soldier from Chicago who corrects Colonel Potter’s recollections of the city; a soldier unconscious due to a snake bite; and a soldier who doesn’t want to fight anymore, forced to listen to Frank prattle on about his life; a soldier who flirts with Margaret. There’s also the medic with newly acquired self-respect. 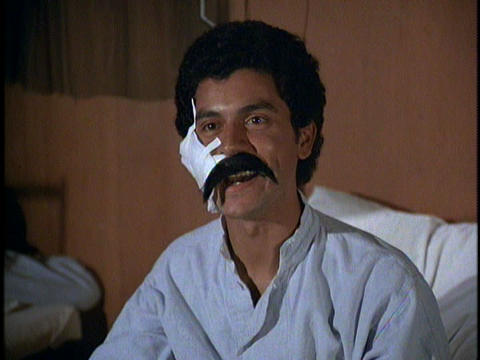 According to Frank, he’ll be going home soon. Was he planning on going crazy after Margaret left for her honeymoon, plotting to get transferred stateside and promoted?

Speaking of Frank, could his resistance to donating blood be a reaction to Hawkeye and Trapper stealing blood from him without consent in “Germ Warfare” back in Season One?

Sal Viscuso, better known for providing PA announcements on M*A*S*H, made his second of three guest appearances in this episode as a soldier who doesn’t want to go home because he’s making too much money in Korea.

There are a few Dracula references in this episode, including a crude drawing of the famous vampire on the Blood Bank sign over the Mess Tent entrance.

Neither Radar nor Father Mulcahy appear in this episode.